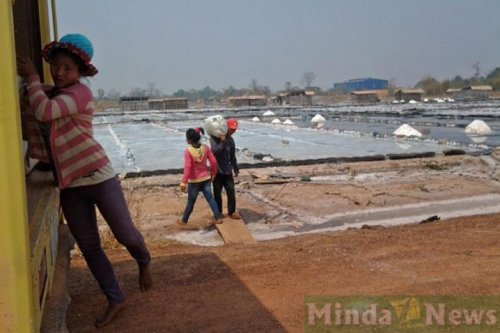 Away from the sea, Laos produces salt by mining in Vientiane basin that shares potash deposits of Sakon Nakhon basin of Khorat Plateau in Thailand.

Named after its abundance of salt deposits, Boukeua (keua means salt) village has the 35-year-old salt factory in the country, the Khoksaath Iodized Salt Factory, which is 21 kilometers from Vientiane Capital.

The compound was silent as a cemetery on a Sunday. Over a hundred of rectangular man-made ponds for drying brine (water saturated with salt water) in the sun, spread in the entire fenced area. They seemed like shallow swimming pools with sea water. Hardened salt on the ground looked like cemented snow, crystal white yet salty.

In a sultry midday, a pale, slender woman was sitting under a shade of a long-stretched open hut that shelters tens of steaming salt kilns in the middle of the compound. With water vapor oozing out from the salty ponds, Ms Nang Thammavong, 25, spent her lunch break like in a sauna.

But her job is not as relaxing as having a sauna bath. She had to work and bear the torrid atmosphere everyday. She might have gotten used to it as she couldn’t remember doing any other chores since she was a kid. Her parents had worked in the salt factory since her childhood.

With a total of 142 employees, the factory was built by a Lao national, Mr Khanchanh Sihalath, from 1978 to 1979, according to the company’s information officer, Ms Somchai Soulisack. It provided the equipment for workers to create salt out of the brine that comes out of the ground. In exchange, the company exclusively buys their products.

Perhaps fate has bonded Ms Nang’s entire lifetime to salt. As a little girl, her parents assigned her to handle a 2×3-meter pond filled with brine cooked above a kiln, which was fed by wood. She was managing the same kind of salt pond when I saw her that day. She said there are over 70 families working in the factory with four to five members who are all assigned to at least a couple of tracts of salt.

The younger Nang was tasked to man one of the ponds exposed to the sun as well. Such way of making rock salt takes a week, while the one over a kiln can produce every two days. She can make eight baskets of salt per day or about 760 kilos of salt every two days with a single pond.

Now that she has two kids (aged 1 and 3) and her parents retired, she has to do it by herself. Meanwhile, her husband changed his fate by leaving the factory to work in Vientiane capital for a bigger income.

Every two days, she sells 16 baskets of salt for a total of 320,000 kip (US$40) for a square she owns. However, she had to deduct the amount for the costs of wood, fuel and other materials. Her net income for filling in the baskets in two or sometimes three days is only about 50,000 kip (US$6). Fortunately, she also tends a pond outside which yields a thousand kilo once a week. From this, she earns 180,000 kip (US$22) without any deduction.

Ms Nang Thammavong sits in front of her baskets of salts, while taking her lunch break on a Sunday afternoon. MindaNews photo by Loraine Ann Cascaro

Unknowingly, this salt woman is taking part in a vital industry in her country.

Laos annually produced 35,000 metric tons of salt from 2006 to 2010. The Khoksaath Salt Factory shares eight metric tons of the production every day. The company exports iodized salt to Vietnam, China and Thailand, among others, and supplies for domestic market.

In 2006, 83.8 percent of total households in Laos use edible salt fortified with iodine, the United Nations reported.

Scientifically referred as sodium chloride, salt preserves food, which was a crucial element for the survival of ancient societies during long period of winters and droughts. It had been used as an old style of dying cloth. And, the ample intake of salt maintains the balance among human bodily systems.

Ms Nang might not be aware of these facts while having to deal with her salty daily routine. But she is a living witness that salt proves to be essential to humans in any sense.

Source: mindanews.com (by Lorie Ann Cascaro of Mindanews is a fellow of FK Norway exchange program. She’s currently in Laos and hosted by Vientiane Times.)