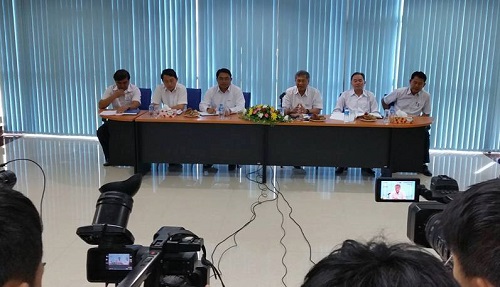 Despite reassurances by Electricite du Laos (EDL) that meters are operating normally and no price change has taken place, consumers are unhappy with the high bills they must pay and want further clarification.

Speaking at a press conference yesterday, the Director of EDL’s Vientiane Power Distribution Department, Mr Mixay Chittarath, said high electricity consumption does not drive up the tariff rate and household meters installed by EDL are still operating based on the price previously set by the government.

But his statement did little to allay public concerns and the response on Facebook was immediate, with people expressing their dissatisfaction over this weak response.

Large numbers of people are angry about the high electricity bills they have received this month, with many people saying it will hit their pockets hard and further drive up their living costs.

Although officials attempted to reassure the public that no changes in the price structure had taken place, many people still believe that the rates levied by EDL must have increased.

Some households have seen their bills for April go up by a factor of three or four compared to the amount they are normally charged.

Mr Mixay explained the high bills by saying “The weather was extremely hot in Vientiane and some provinces last month with temperatures ranging from 39 to 40 degrees Celsius or more. Because of this, some people consumed a lot more electricity than usual.”

He referred to the fact that some people suspected there was something wrong with EDL’s meters, but said “In fact, the electricity tariff is still the same; the bill depends only on how much electricity has been consumed.”

One person attending the press conference, who asked not to be named, told Vientiane Times he is bitter about the fact that he normally pays about 400,000 kip a month but his bill for April was almost 1,000,000 kip.

During the press conference, many questions were asked by reporters on behalf of the public, with some pointing to the effects of the high electricity bills on consumers of varying income groups.

Some of those present said that high-income consumers would naturally consume more electricity because they owned more appliances.

Another person suggested that if the government wanted to increase charges, it should tailor bills to exempt lower income groups, especially as consumption by this group is low and would have little effect on the revenue received by EDL.

Low-income consumers use only a small proportion of the total energy consumed and are not much affected by electricity price increases.

On the other hand, the poor are faced with ever higher living costs and this latest price increase only adds to their burden.