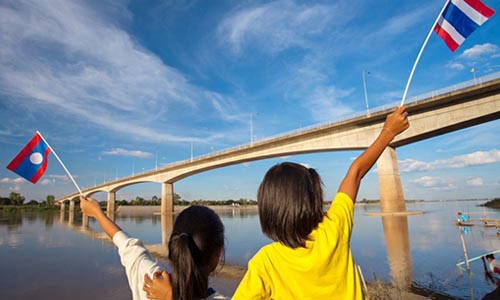 It happens on a daily basis all across Thailand. The casual insults come from a sense of superiority ingrained since school days: “Thais are better than their neighbours, the Lao.”

The insults usually don’t reach Lao ears and so are rarely challenged.

Last week, however, a Thai photographer was forced to apologise for a defamatory remark he made while covering the Vientiane Moto Expo.

“Damn, they’re so Lao”, he posted on Facebook, referring to pictures taken at the event by his Lao colleagues.

Typical of Thais of all professions, he thought his work was far superior to anything his neighbours could produce.

By using “Lao” as a synonym for inferior, he was insulting not just the people of that country but also the millions in Thailand’s Northeast, who share the same cultural roots.

Shortly after the post went up, the Lao social media erupted in protest.

“This is not the first time. The insults have been coming for a long time. Thais always look down on Lao,” wrote popular news website Tholakhong.com. “Why do ethnic Lao, particularly those living in Isaan, have to tolerate this behaviour from some Thai people.”

The strong reaction prompted that show’s organiser to cancel the Thai photographer’s contract and advise him to return home quickly. He took refuge in the Thai Embassy in Vientiane for the night, making a short video of apology to Lao nationals.

The story ends there, but the saga of chauvinism by Thais towards their Lao cousins will last long as Thai people old and young are indoctrinated with a national history that values patriotism above plain fact.

The ancient Lao kingdom of Lan Xang encompassed the entirety of what is now Thailand’s Northeast, where most still share a language and culture with people on the opposite bank of the Mekong. While it is historically correct to say that Lao became a tributary of Siam during the early Rattanakosin Era, its people never became Thai, not even those in Isaan.

Thai nationalism since the 1950s, bolstered by anti-communist sentiment during the Cold War, spread a doctrine of “Thainess” that emphasised Siamese historical conquest over almost all of Southeast Asia. The fact is that Siamese territory never encompassed anything close to that size, and Siam suffered many defeats by other kingdoms. Yet the story of Siamese armies burning down Vientiane has been passed down the generations. Thai authorities have been similarly selective in proudly recalling how Field Marshall Plaek Phibunsongkhram occupied parts of Laos and Cambodia during World War II. Such episodes are used to justify their claims of superiority.

Economic success over the decades has spurred Thai chauvinism. The Lao economy has lagged since the 1970s when communists took over, and faced an economic blockade during the Cold War. Since then, much economic assistance has come from Thailand.

Surveys in Laos indicate that the public feels no country shows more animosity towards them than Thailand. Statements like the one made by the Thai photographer reinforce that belief.

Things are changing, however. Laos’ economy has been growing faster than Thailand’s over the past few years. Vientiane has developed to the point where it can rival large Thai cities for sophistication. Tourists increasingly see unspoilt Laos as a more attractive proposition than Thailand. Thai scholars have said the Lao elite are smarter than their Thai counterparts when dealing with China.

Our neighbours have even adopted a phrase to mock Thai exceptionalism: “Don’t be Thai to me.”