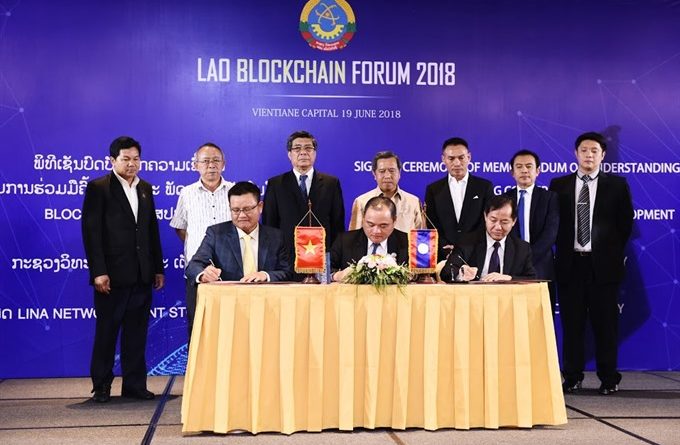 The application of blockchain, specifically digital identity, will bring huge benefits to the Lao government and citizens, said BoviengkhamVongdara, minister of science and technology.

He made this statement at the Lao Blockchain Forum 2018 held in Vientiane on Tuesday. According to him, the adoption of Blockchain Technology will allow the Lao citizens access to various public services.

As the technology can be utilised in many sectors, including agriculture, finance, banking and healthcare, it can help enhance the transparency and efficiency of State management, Vongdara said.

A Memorandum of Understanding (MoU) was signed on the same daybetween the Lina Network and the Ministry of Science and Technology of Laos for the deployment of digital identity using Blockchain.

Under the MoU, the company will provide solutions to develop Blockchain Application for the Lao government based on Blockchain Technology, Internet of Things, Big Data and Artificial Intelligence.

The Lina Network will provide US$500,000 in financial support to the ministry to establish a Blockchain Research and Development Centre in five years for developing human resources and research as well as to develop Blockchain Technology, Big Data and Intelligence Technology to serve the government’s applications.

“After studying the technology platform and solutions from Lina Group, we thought of the need to set up a new model with breakthroughs in data management. The Blockchain research institute will find and train high-quality human resources for the establishment of other applications aimed at enhancing the development of science and technology in our country,” Vongdara said.

Vũ Trường Ca, chairman of Lina Network Co.JSC, said to maximise the opportunities brought about by the Fourth Industrial Revolution as well as to strengthen the efficiency and transparency of State management, the application of information technology and e-governance was a must.

Currently, most e-governance systems are “citizen-centric,” where people only need a single sign on a single window. They can interact and use services of the government all the time, Ca said, adding that the process will help increase transparency, reduce costs and promote socio-economic growth.

“With Blockchain Technology, data is digitalised quickly and ensures security. We can share information without the intervention of a third party. All the information shared by users after being identified with Blockchain is considered public record on the digital platform,” he added.

On the prospect of application of Blockchain Technology in Laos in future, Ca said the country was facing many challenges, including shortage of hi-tech human resource, low awareness of the common citizen and lack of legal corridor for cryptocurrency.

Vongdara acknowledged that human resource was the main problem for the country in the application of new technology.He said the MoU would help the country to focus on preparing human resources and complete necessary legal documents to meet the new requirement.

Ca said he believed that with a population of some seven million people, it was easy for Laos to deploy digital identity.

Prior to Laos, Estonia and Dubai had also adopted Blockchain Technology for government use and gained some success in the field of State management. The two countries have populations of 1.3 million and five million, respectively.

Lina Network Corporation has its headquarters in Zurich, Switzerland, named Smart Link Swiss. It specialises in helping companies apply Blockchain Technology in practice, such as building of a supply chain management system in agriculture or applying the same in healthcare services and the insurance sector.

The corporation is a global company, with international teams in countries such as Switzerland, the United States, Germany, Australia, New Zealand, Israel, Thailand and Việt Nam.