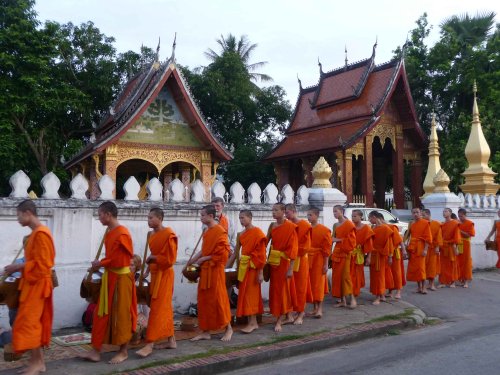 Readers of Wanderlust, a leading British travel magazine, have voted World Heritage listed Luang Prabang as one of the top two cities in the world to visit for 2014.

Luang Prabang ranked second after Bagan city in Myanmar while third place belonged to Nghe An in Vietnam, according to a report from Luang Prabang Provincial Department of Information, Culture and Tourism.

Some 95.71 percent of the readers nominated Luang Prabang as their favourite while 97.5 percent also voted for Bagan city in Myanmar and 94.33 percent voted for Nghe An in Vietnam.

However, Laos as a whole was the 10th top ranked country to visit for 2014 with 93.19 percent of the magazine readers voting for it.

The ranking will further encourage the future growth of the tourism industry in Luang Prabang and the country as a whole to improve services and facilities to better serve domestic and international visitors.

Asking her why the ranking didn’t correlate into larger numbers of visitors to Luang Prabang compared to other cities that attract millions of tourists, Ms Soudaphone responded that the ranking has nothing to do with the number of visitors.

She explained the ranking is related to the experiences of tourists which, if positive translates into more favourable scores. Too many tourists do not always mean a favourite destination to visit, she observed.

“Luang Prabang province has a population of over 400,000 people and the number of overseas visitors in the province is more than 340,000 people. I think that it’s okay,” she said, while admitting that more needs to be done to create attractions and an information campaign to entice more tourists to the city.

Wanderlust readers previously ranked Luang Prabang as “best tourist destination” for three consecutive years from 2006-2008. In 2009 it fell but was still in the top 10 in the same category before again topping the list from 2010 to 2012. Last year, the city was not included on the list of the top 10 cities.

Luang Prabang is the former capital of the Lane Xang Kingdom, or the Land of a Million Elephants. The town is a cultural centre in the region, with its numerous temples paying testimony to its former glory.

Its landmark attractions are its centuries-old Buddhist temples and monasteries, Kuang Xi waterfall, Phousy hill and Buddha cave, all of which are easily accessible.

Due to its wonder, UNESCO declared the town a World Heritage Site in 1995 and since then tourist arrivals have risen with each passing year.

In 2013, the number of overseas visitors to Luang prabang reached 343,000 people and the province has set an ambitious goal for tourist arrivals to hit the 500,000 mark this year.