A BACKPACKING couple on a once in a lifetime trip in Asia have relived the moment they escaped a fatal bus crash.

Sean Martin, 26, and Gemma Sanderson, 27, said they were still suffering flashbacks after their sleeper bus crashed and flipped onto its roof as it travelled through Laos.

The couple, of Rishton, packed up their lives in October to fulfil a dream of travelling Asia for six months.

But as they were travelling between Pakse and Vientiane the bus overturned killing two passengers.

Ms Sanderson needed hospital treatment after injuring her hip and back.

Mr Martin, a former pupil at St Wilfrid’s CE Academy in Blackburn, said he felt lucky to be alive after discovering one of the dead travellers bought the ticket directly before him.

He said: “We were around 100km away from Vientiane and I suddenly felt the bus twitch which woke me up. At that moment the bus started swerving uncontrollably.

“I just remember being thrown around and the sound of the roof closing in. There was glass shattering all around and the crunch of metal sliding on the road. 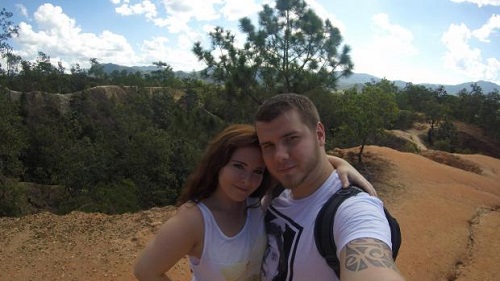 “Then all of a sudden there was a deathly silence and a smell of fuel and hot metal.

“Once the bus came to a stand still I had to get myself and my fiancée out.

“I couldn’t see my Gemma and panicked but then heard her calling for me.

“I instantly ran over to where she was and helped pull her out.

“Once I had her safe, a group of us that could still help carried on pulling the people we could out of the bus.

“As we did this we saw the local people smoking near the bus that had fuel spilling out. We went mad at them but they didn’t seem to realise the danger.

“I then went back to my fiancée to find her on the floor as she was unable to get up.

“I knew I had to get her to hospital so we eventually got on a local man’s pickup and he drove us to the nearest one.

“It could barely pass as a hospital though as it was filthy and could not cope with the amount of injured people.”

While the couple were at the hospital they saw dozens of passengers arrive with cuts and bruises, punctured lungs and broken bones.

Mr Martin said: “One girl had most of the skin and tissue missing on her forearm.

“After around two hours we got the news that two people had died.

“We just couldn’t believe what we were going through. We then found out that the people who died had done so in the next bed to us.”

Mr Martin and Ms Sanderson, who is a former student at Witton Park Academy in Blackburn, were transferred to Vientiane Hospital but waited 15 hours in ‘extremely poor conditions’ to be seen by a doctor.

They said they got in contact with British Embassy officials to arrange an ambulance to take them to a hospital in neighbouring Thailand.

Mr Martin said: “We are both still in shock about the whole situation and can’t believe we came out alive.

“We can’t close our eyes without getting flashbacks.

“We had met the Korean girl who had died when we caught a tuk tuk to the bus station before the journey.

“She actually bought the ticket just before us with her friend.

“We feel so lucky to be here but are really cut up about those who have worse injuries and the two people who lost their lives.