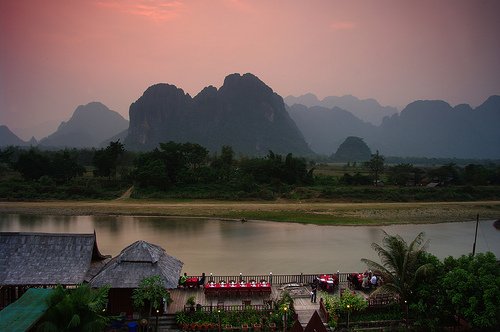 Laos has been unable to convince foreign visitors to spend more money here and provide a boost to the economy, despite a significant increase in the number of overseas visitors in recent years.

Statistics show that a foreign tourist visiting Laos spends 8.4 days here on average – less time than in other countries in the region, even though Laos boasts a wide range of cultural, historical and natural attractions.

Deputy Head of the Tourism Analysis and Administration Division under the Ministry of Information, Culture and Tourism, Mr Bounthavy Sisava, said the average length of stay of foreign tourists in Laos is shorter than in many countries in the region.

This means they spend less. In 2013 Laos earned almost US$596 million from the more than 3.7 million foreign visitors to Laos recorded in the year, according to statistics from the ministry.

Mr Bounthavy said officials have not yet analysed the reasons why visitors spend less time in Laos than in other Asean countries.

But an unofficial estimation suggests this could be explained by the fact that Laos is not considered a primary destination for most people, he added.

A lecturer at the Faculty of Tourism and Hotels at the National University of Laos, Dr Saithong Phommavong, noted that there could be several reasons for the shorter visits.

He suggested that activities associated with tourism are not varied enough.

For instance, he noted, many tourists who go trekking in National Protected Areas or other places spend only a few days there, which he said was because there weren’t many other activities on offer to encourage tourists to extend their stay.

“We can add more things for people to do and see such as the study of plant and animal species and other specific areas of learning, as well as activities that give tourists the opportunity to experience local conditions and lifestyles,” Dr Saithong said.

He also stressed the need to develop infrastructure so tourists can easily reach places of interest, along with developing facilities at these sites so that visitors can explore more and extend their stay.

Lastly, Dr Saithong said improving the quality of tour guides was important so they could provide an impressive service for visitors, which he said could help to prolong the length of their stay.

“A tour guide should not just be someone who can communicate with visitors. He or she should also be familiar with the special features of local attractions so they can fully explain them to visitors,” he said.

“If they do not have proper knowledge of what these attractions offer, then the tour will be rushed and that will shorten a visitor’s stay.”

In a city such as Vientiane, Dr Saithong added, there have not been many tourism-associated activities to encourage visitors to stay longer.

Laos has witnessed a robust growth in foreign tourist arrivals in recent years. In 2011 arrivals stood at more than 2.7 million visitors. This rose to more than 3.3 million in 2012 and more than 3.7 million people in 2013.