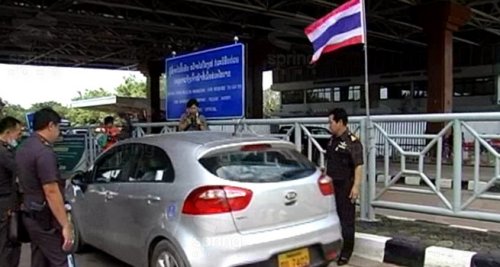 Vehicle owners who have not paid road tax will not be permitted to cross the border into other countries, under a new measure that has been introduced to force people to pay the annual tax.

The Ministry of Finance issued a notice about the ruling on February 18 to the Customs Department, customs management units, international customs checkpoints, Taxation Department, and provincial tax authorities.

In the past, vehicles registered in Laos were required to have a registration certificate, technical certificate, transnational transport permission booklet or temporary permission to make a border crossing, vehicle insurance, and other documents in order to enter or exit Laos.

Under the new ministry notice, a road tax payment certificate must also be presented when crossing the border.

The notice is the latest move to enforce the payment of road tax by vehicle owners after the government has fallen short of the target set for road tax revenue over the past few years.

Statistics collected in 2017 show there are about 1.8 million vehicles in Laos with 843,500 registered in Vientiane. This figure excludes vehicles owned by defence and security units.

The government has provided more options for the payment of road tax in recent years, using five bank channels, namely over the counter, BCEL One and BCEL I-Bank online mobile applications, ATMs, BCOME, and the bank’s franchises.

The Ministry of Finance issued a notice on February 15, 2019, which designated January to March every year as the period for road tax payment.

The latest notice from the Ministry of Finance does not say when the new ruling will come into effect.

According a news report on a meeting of Lao and Thai pollution control agencies held in Nong Khai, Thailand, in 2018, some 1.3 million cars cross the border between the two countries annually, 70 percent (910,000) of which are registered in Laos.