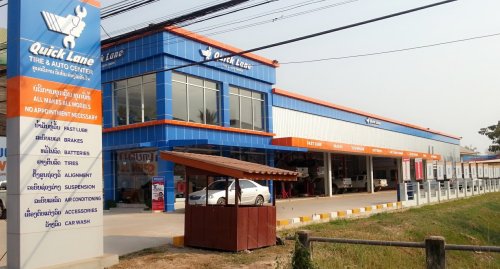 Time to put new ones, but where to get them ? Of course the first place to check is the Toyota dealership between Patuxay and the Vietnamese Embassy. At my first visit Toyota quoted Baht 4’180, which includes replacement of two struts and labor. On my second visit they reduced the price to Baht 3’420. The struts however were not on stock and would take at least 1 week to order.

On a friend’s recommendation I also checked out Quick Lane, which is located just next to the Sengdara Gym. Here I was given the price of Baht 4’000, but listen up … for each strut ! Overall bill: Baht 8’000. Also here the spare parts are not available, 2 weeks order time.

Well, to cut the story short, I got the new struts for Baht 2’850 at the Toyota dealership in Nongkai, it took the service people 30 minutes to install the new struts … a short pit stop on my way to Udon.

As I still can’t believe that Quick Lane would charge 180% more than Toyota, I went back today and asked the sales person to confirm one more time their pricing. Result: price confirmed, but now offering a discount, new price Baht 7’200 !

It’s sure worth checking the pricing at various places, and this goes not only go for car parts. If the spare parts would have been available at Toyota Laos, I would have done the job there, the price difference compared to Thailand is justified and fair. If you however want to see a super efficient and well organized car work shop, visit Toyota in Nongkai … I’m still impressed from my last visit.

During a meeting with the General Manager and the Group After Sales Manager of Quick Lane (Lao Ford City), both gentlemen offered their sincerest apologies and explained what went wrong with regards to the pricing.

I was provided with various documents proving that the mistake is with Lao Toyota (confirmed by Lao Toyota, see letter below).

Quick Lane’s management has been taking this case very seriously and will use it to further improve their services.

I’m very satisfied how Quick Lane and its management have reacted, quick and in the outmost professional way. My conclusion: they are definitively not going for the quick buck !