Cambodia and Thailand have joined hands to increase foreign and inter-ASEAN tourism under the “Two Kingdoms, One Destination” tourism pact.

Tith Chantha, secretary of state at Cambodia’s Ministry of Tourism, said Cambodia and Thailand have already created a single-visa option for tourists looking to explore both countries in one trip.

“Now, we’re joining with Thailand to promote Two Kingdoms, One Destination. It will make it much easier for tourists who don’t want to visit only one country during their trip,” he said.

“Thailand has a lot of airlines operating long-haul to Europe or the United States – we don’t have many of those long flights, so we will benefit from this once the campaign kicks in.”

Thailand’s minister of tourism and sports, Kobkran Wattanakvrangkul, told the Bangkok Post that the campaign would run from 2015 to 2017.

“The collaboration looks forward to exchanging foreign travellers and facilitating travel across both countries. The plan also promotes intra-ASEAN tourism,” Kobkarn was quoted as saying. 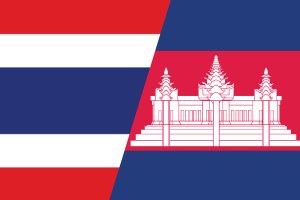 The campaign will promote two major tourist routes. One will run along the Gulf of Thailand’s coastline, going through Bangkok, Rayong, and Trat in Thailand to Koh Kong, Sihanoukville, Kampot and Phnom Penh.

The other will also originate in Bangkok and end in Phnom Penh, but will go through further inland from Aranyaprathet in Thailand to Poipet, Battambang, and Siem Reap.

Ho Vandy, co-chair of the Government-Private Sector Working Group on Tourism, welcomed the initiative. He said that Cambodia had been cooperating with Thailand’s tourism association since 2008.

“Now that this is being done on a governmental level, it will be a big boost because it will share benefits with both countries,” he said.

“We have observed that we got more than 30 per cent of [Cambodia’s] tourists from Thailand since the promotion began.”

Tourist arrivals to Cambodia from Thailand were up 37 per cent to 71,572 visitors during the first quarter of 2015, ranking fifth, while Vietnamese tourists still ranked first followed by China, South Korea, and Laos, according to the Ministry of Tourism.

Plain Of Jars On Track For UNESCO Listing Next Year
Tourism Creating Wealth Of Job Opportunities For Lao People
Share This Post: