Twenty five Thai football fans were arrested and the Royal Thai Embassy in Vientiane was forced to issue a formal apology for their behaviour, with several videos posted on social media channels showing Thai football fans reacting aggressively to police requests to extinguish flaming road flares they had set off in the terraces after the Thailand team scored a goal.

Scuffles quickly broke-out when Laos police attempted to restore order, with Thai football fans clearly seen punching Laos police and poking them with flag poles. In the video and freeze-frame above a Thai football fan can be seen sucker punching (one hit punch) a Laos police officer in the head sending him flying through the air, while another is seen drawing his side-arm.

Vietnamese fans in nearby sections of the stands can been seen throwing water bottles into the Thai football fans, who responded by calling on the much larger number of Vietnamese football fans to fight.

In it’s official apology the Royal Thai Embassy in Vientiane said: “Some sections of the Thai fans were uncivil in their conduct towards the officials of Lao People’s Democratic Republic.

“The Embassy is saddened by the incident and would like to apologise to the officials and the people of Laos for what happened.”

Thanks to hi-definition video such as the one above Laos authorities should have no difficulty in identifying all Thailand football fans responsible for the fracas. 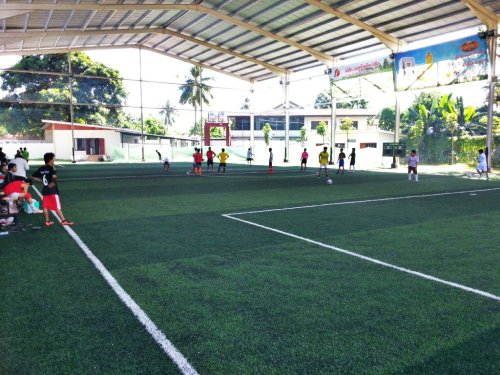