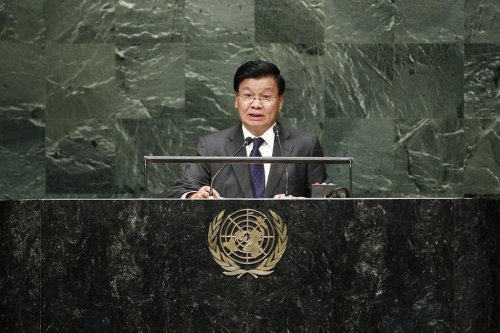 This was among the remarks delivered by Lao Deputy Prime Minister and Minister of Foreign Affairs Mr Thongloun Sisoulith at the United Nations General Assembly in New York recently.

“We have only 450 days left to work out and accomplish the MDGs. While many countries have seen progress to achieve the MDGs, others still face delays and obstacles to accomplish the set goals,” Mr Thongloun said.

As a landlocked and least developed country, Laos remains vulnerable and still faces numerous challenges, especially in achieving some MDG targets, including reducing child malnutrition, ensuring gender equality in education, reducing child and maternal mortality, and minimising the impacts of unexploded ordnances (UXO) dropped during the Indochina war, he said.

The Deputy PM described how Laos has suffered from UXO which results in numerous deaths and injuries annually, including those sustained by women and children. Many people became disabled as a result of the bomb explosions. UXO also impedes development efforts in Laos to graduate from least developed country status by 2020.
Mr Thongloun noted that the regional and international situation has been changing in a complex way and reiterated that peace and stability is key to boosting national development.

He said for any country to achieve success in socio-economic development, it needs to enjoy peace and stability, which is a necessary precondition to development and growth.

Laos is concerned about rising conflict and the use of force in many countries around the world, which is affecting international peace and security.

Mr Thongloun urged all parties to avoid the use of force and resolve disputes through peaceful means in order to avoid the loss of lives and property.

He also called for the UN to strengthen itself through the reform of its various organs to “fulfill its obligations in a more effective manner.”

The Deputy PM also touched upon the government’s efforts to boost national development and poverty reduction among the Lao people following national liberation in 1975.

With support from development partners, Laos has been able to make progress in socio-economic development over the past 39 years.

Laos is a member of Asean and will become part of the Asean Community in 2015, he noted. In addition, Laos has been given the honour to host the Asean Summit in 2016.

The 69th annual United Nations general assembly brought together more than 140 heads-of-state and government.
This year’s agenda is crowded with talks and speeches on new crises, including the rise of Islamic State extremists in Syria and Iraq, the Ukraine crisis and the deadly Ebola outbreak, as well as old standards such as climate change and nuclear disarmament.