A programme to vaccinate girls against the virus that causes cervical cancer has begun in Laos, South East Asia.

It’s one of nearly a dozen developing nations where the HPV vaccine is being introduced in the coming year as part of a scheme to enable poorer countries to benefit from the newest vaccines.

It is five years since the jab was first offered to girls in the UK.

The project is being organised with the support of the Global Alliance for Vaccines and Immunisation (Gavi).

The vaccine protects against the sexually transmitted human papillomavirus – preventing the infections that cause 70% of cases of cervical cancer.

‘Proud’ to be immunised

Khonekham Sirivong, 13, stood patiently in the queue of girls waiting for the HPV vaccine.

This was a poignant moment for her and Somsouk, her aunt, one of the nurses, under the shelter of trees in the school grounds.

“I remember she was in a lot of pain,” said Khonekham. “The family did everything it could, but she died. I am very proud to be immunised – and to have the HPV vaccine free of charge.”
Vaccine ‘crucial’

Cervical cancer is a far bigger cancer killer in developing countries because most lack a national screening programme, which can detect pre-cancerous changes in the cervix, enabling timely early treatment.

In Laos, most cases are discovered too late. Cancer treatment in the world’s poorest nations is also limited. Laos has no radiotherapy. Patients who can afford it are sent to Thailand.

“Approximately 275,000 women die every year from cervical cancer and over 85% of those deaths are in the developing world,” said Helen Evans, Gavi deputy chief executive.

“The number of deaths is projected to rise dramatically, so that’s why it is absolutely crucial that this vaccine is introduced.

“The HPV vaccine represents a very significant commitment to women’s health in the coming decades.” 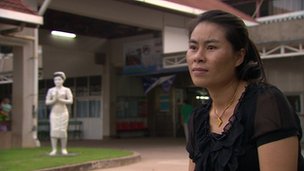 “I feel lucky to be alive,” said Sommay Khamkeomany

I have visited a lot of hospitals, in many of the world’s poorest countries – from Sierra Leone to Malawi and Bangladesh. But they have rarely been as crowded at Setthathirath hospital in Vientiane.

A senior oncologist, Dr Keokedthong Phongsavan, showed me round one of the wards, where the beds had spilled out into the corridor and were squeezed next to each other to accommodate more patients.

However, it was not the overcrowding, but the limited treatment options that presented the biggest problem.

“I feel helpless,” said Dr Phongsavan. “Patients are often diagnosed very late, and then there is often very little I can do to help them. I have to send them home to die.”

The mortality rate for cervical cancer in Laos is six times that of the UK. But there are some success stories. Sommay Khamkeomany was diagnosed with cervical cancer last year when she was just 32.

She had surgery and has now been told she has a 95% chance that her cancer will not recur.

“I have two girls aged five and three,” said Mrs Khamkeomany. “When they are old enough I will ensure they have the HPV vaccine – and fortunately I should still be here to see that happen. I feel lucky to be alive.”

The HPV jab is the most expensive of all childhood vaccines. A course of three injections can cost more than £200 privately in the UK and other wealthy countries. It was well beyond the reach of most developing nations until Gavi negotiated a price of less than £10.

Like other Gavi-supported countries, Laos has to make a token financial contribution, but also has to supply the nurses and organise distribution of the vaccine.

The two-year pilot project in Laos involves about 20,000 girls being immunised. If successful, it will lead to a national roll-out of the jab.

By 2020, Gavi hopes to have supported HPV immunisation of more 30 million girls in over 40 countries.

The benefits, in terms of lives saved, won’t be felt for decades, but it represents a milestone in the promotion of women’s health.