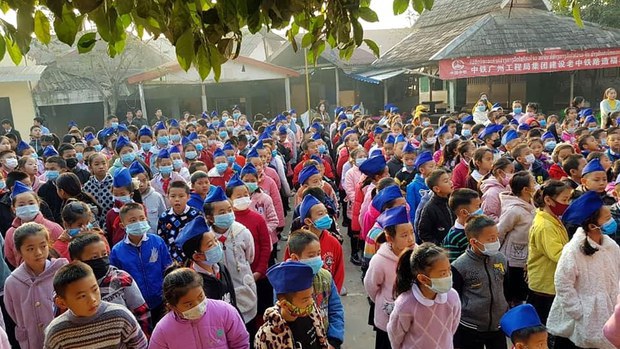 A Chinese language education boom is underway in Laos as Beijing’s increasing investments in the Southeast Asian country point to a future where Chinese companies dominate local commerce, sources in Laos told RFA.

Chinese investment in Laos was a mere 1.5 percent of its total foreign direct investment (FDI) in 2003, but Beijing accounted for 79 percent of FDI in Laos in 2018. The sharp rise in investment has prompted job hunters in Laos to view proficiency in the language as an essential skill.

“I am learning Chinese because there are many Chinese investments in Laos, and Chinese fluency will help me to get a job with Chinese companies more easily,” a student attending a Chinese private school in the capital Vientiane told RFA’s Lao Service Feb. 18.

“It will also help me continue on to higher education in China,” said the student, who requested anonymity for security reasons.

A student at the National University of Laos, the country’s top-ranked educational institution, told RFA that the country’s future lies with Beijing. China and Laos are fraternal one-party communist states that share a land border.

“Laos and China are close friends and partners now. Most companies and investors doing business in Laos are Chinese,” said the university student, who requested anonymity to speak freely.

“To get a job you have to speak Chinese. That’s just the way things are. If you speak only English, where and with whom are you going to get a job?” the university student said.

A government employee in Vientiane told RFA that even public education should include Chinese.

“Chinese investment is rising. Most large investors are Chinese. Our youth should learn Chinese in order to have a better future,” said the government employee, who declined to be named.

“Here in Vientiane, there are so many schools teaching English, French and Japanese, but Chinese is becoming more popular and there are more and more Chinese schools opening up, and there are more students, including adults who work for Chinese companies,” the government employee said.

Mulan Education Center, one of the city’s more prestigious Chinese language schools, opened for the new semester Feb. 6 with a crowded open house attended by many high-ranking officials including the vice ministers of finance and foreign affairs.

Mulan, which teaches kindergarten through high school and offers continuing education for adults, first opened in 2019 with 306 students, but in 2020 enrollment more than doubled to 705, Pavina Insixiengmai, a representative of the school, told RFA. She said attendance could double to more than 1400 this year.

“We are accepting children, high school and university students and government workers. On the day of the grand opening, we enrolled several hundred students because so many more people are interested in learning Chinese,” a member of the school’s faculty told RFA.

An adult student of Mulan told RFA that the school would help in finding employment with a Chinese firm.

“I write and read Chinese, but my speaking is not so great. I am attending Mulan to improve my spoken Chinese. Chinese are the top investors in Laos right now, so speaking Chinese will help me to get a job faster,” the student said.

While most of the Chinese language schools are concentrated in the capital, schools have sprung up in Laos’ northernmost provinces, especially those that share a border with China.

Luang Namtha province is home to the Sino-Lao High School, which has a student body of about 200.

“In addition to that, there are many small Chinese schools like two-classroom schools run by Laotians who graduated from China,” an education official of Luang Namtha province told RFA.

An Oudomxay province official told RFA that two schools, the Laos-China Friendship High School and the Xiew Pei School are the most popular there.

“These schools attract many students because they teach both Chinese and English. In Oudomxay there are about 10 English schools but now many more students are going to Chinese schools,” the Oudomxay official said.

Meanwhile Bokeo province, a popular destination for Chinese tourists and gamblers, will welcome a new Chinese language learning center in the town of Hoeyxay.

“The school will teach Chinese to high school students who want to continue their education in China,” a Bokeo education official told RFA.

In an effort to promote studies of Chinese language and culture worldwide, Beijing has established partnerships with foreign universities to set up language schools, called Confucius Institutes.

The Confucius Institute at the National University of Laos is by far the largest and most popular Chinese language school in the country, an employee of the institute told RFA.

Universities in China are now setting up campuses in Laos.

Though the World Bank in October 2020 acknowledged that Laos made many developmental gains over the past two decades by halving poverty, decreasing malnutrition and improving education and health, it also said Vientiane could do better at schooling children.

“A child born in Laos today will only be half as productive as she could be if she enjoyed full health and education… While a Lao child goes to school for 10.8 years on average, she only receives the equivalent of 6.4 years of learning,” the World Bank said.

According to UNESCO, in 2019 91.6 percent of Lao children of primary school age were enrolled in schools, but for secondary school-aged students the enrollment figure was 58.8 percent.

UNICEF in 2017 reported that only a third of Lao students in grade 3 met literacy standards, and only a fifth passed math standards for promotion to grade 4.

“For each additional year of education among young adults, poverty rates were 9 percent lower,” the report said. Chinese Investments In Laos Soar, But Little Wealth Is Spread