Well, it’s true I’m the new kid in town, so what can I say about the Vientiane dining experience that someone who has been here longer wouldn’t already know?  That’s always the struggle for a writer covering a popular spot like Chokdee, an authentic Belgian cafe located Eastward along the Mekong River in the city center.

I’ll come clean and say that I don’t have much familiarity with Belgian cuisine, but fortunately the general manager and chief investor in the cafe, Vincent Wirtgen, was there to take me on a culinary journey and to explain the subtle nuances of what differentiates a cafe from a bistro from a bar from a pub from a restaurant.

Some people throw these labels around loosely where I’m from.  But, what you need to know is that you can eat with your drinks or drink with your eats. Wirtgen, 32, a former volunteer with Jayandra, describes the cafe as a place where both families and friends meet and form a close community.  He has a strong cast of regulars who turn up several times a week in some cases in addition to those who make it more of a special occasion.

What’s remarkable in this location is that the vast majority of his clientele are residents rather than travelers a fact that sets it apart from many establishments in the area.

It’s not just about the extensive beer list and quality of food, says Wirtgen, “It’s common for strangers to meet and enjoy a lively conversation and greet each other as friends the next time they enjoy a meal or drink together.”

Like many newcomers to Vientiane, I have wandered the riverfront in search of food and a perch to observe the parade of possible patrons looking to satisfy their appetites.  Chokdee Cafe, caught my eye, but I was just a shoestring backpacker at that time, so I looked longingly at the impressive display rack of premium Belgian beers and slunk away in defeat vowing to return like MacArthur.

Although I missed my chance that time, Alex Richards, a geologist working down in Attepeu, knows better than to pass up an opportunity to visit when he can.  “Of course I come here to meet friends when I’m in town, but it lets me try out the different beers”, says Richards. 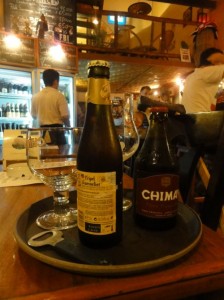 Favorites like Chimay and Blanche de Namor along with many choices of other well-known Belgian wheat beers draw in many connoisseurs and those who are curious about what an alternative to Beer Lao might taste like.

It doesn’t take long looking in from the street to see that the place is bustling with activity and an inviting warmly lit atmosphere with icons of Belgian popular culture and a view of the Mekong.  In just three short years Wirtgen and his staff have transformed a fledgling business into a hub for diplomats, professionals, and neighborhood folk who appreciate his jovial demeanor and hospitality.

“It’s been good for me and my family”, says Alan Boatman, a native of Bermuda who lives and works here as an environmental consultant.  “My wife and I have had birthdays here and I often meet friends here when I can.”

Boatman also noted that there is something special about the people who come to Chokdee regularly.  Unlike the linguistic barriers that can create separate enclaves for French and English speaking people, this cafe is more diverse.

“The main reason I like this place is that typically the Anglophone and Francophone communities are not associated in such a close way”, said Boatman.  Many others echoed this sentiment, and my own experience confirmed it.  Tables of native French speakers welcomed me into discussions and even directly invited me to join them when I sat alone. In the kitchen the busy staff makes the most of a small space where a dozen burners are used to produce food that is at once consistent and timely.  I had a chance to try the ‘Belgian Fries’ and a beef stew that was a perfect complement to my beer.  Although it was the Belgian chocolate mousse that caused me to have a ‘When Harry Met Sally moment.  I hope no one was looking.

The cafe’s three levels can accommodate more than 85 people and on Fridays and Saturdays the famous mussels dishes mean extra chairs are needed.  On those nights a reservation is recommended.

The mussels deserve more than just an honorable mention.  There are seemingly countless ways to have them prepared and they are the most popular menu item.  Onions, white wine or beer, crème, curried – you decide.

Getting ingredients for an authentic taste can be a challenge for any expat serving foreign fare.  This means frequent trips to Thailand for fresh seafood and other hard to find items in addition to some help from other friends in the industry.

This topic inevitably comes up when I chat with expats who are in from Thailand for a visa run or a short holiday.  Most of everything in Laos is imported, which is reflected not just in the price of goods but it also affects food prices.   But, Chokdee is a place where you go when your first priority is taste and ambiance. So, whether you are looking for good times with friends, a romantic view of the Mekong, or a place to host a group event, Chokdee can provide you with the atmosphere and the feeling of belonging that many expats seek.

2 thoughts on “Chokdee – A Taste Of Belgium On The Mekong”