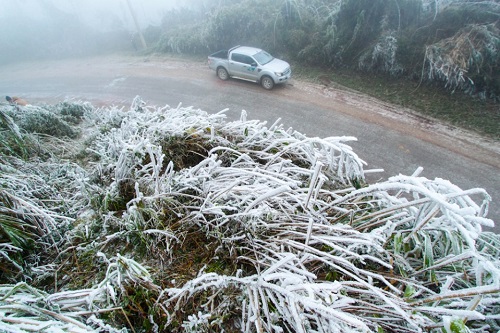 Many cars in the northern parts of the country appear not to have started in the cold weather and some people have speculated that maybe the stranded motorists were using low grade fuels.

Last week saw many vehicles in the northern provinces of Phongsaly, Huaphan and Xieng Khuang out of work as they could not start due to the fuel lines freezing up.

Deputy Director of the State Fuel Enterprise Mr Phayboun Phomphaphithak told Vientiane Times on Wednesday that low grade fuels will start to freeze at a temperature of 0 Celsius.

A high pressure system from China last week brought cold weather and a heavy frost cover to the northern part of Laos.

The lowest temperature recorded was -1.5C in Phongsaly, zero degrees in Huaphan and 0.2 degrees in Xieng Khuang province.

Based on the international fuel standards used in European comprises, there are three standards, those being Grade 2, Grade 3 and Grade 4.

Mr Phayboun mentioned that the standard of European Grade 2 will become solid ice at a temperature of 0 Celsius but the Grade 4 fuel will still not freeze when the temperature reaches -5C. Right now Lao State Fuel Enterprise is using European Grade 4, which is a high quality for vehicles.

“However, it doesn’t mean that the gas stations using the logo of Lao State Fuel Enterprise can prevent each vehicle’s fuel from turning to ice when chilly weather arrives because the small gas stations sometimes buy low grades of fuel from elsewhere for sale at the stations,” he revealed.

Gas sellers who like to sell low grades of fuels are mostly at the small fuel shops because they will receive more income from selling low grade fuel.

Because of this reason when the temperatures in some areas are recorded at about 4C or 5C, some vehicles also could not start, as the fuels might be frozen, or the vehicles themselves may be quite old.

Hundreds of gas stations in Laos are selling fuels, so the authorities suggest that motorists have to add fuels at the big gas stations to avoid lo w grades of fuel.

The Weather Forecasting and Aeronautical Meteorology Division of the Meteorology and Hydrology Department has updated the latest weather forecast for the main provinces.