I LOVE TO TRAVEL by river—the slower, the better. Drifting close to the pace of the stream forces you to shelve your impatience, and surrender to your surroundings. You have meandering conversations, watch the scenery roll by, get quiet inside.

A friend of mine, a longtime resident of Thailand, didn’t know this when he suggested my wife, Kathryn, and I top off a busy two weeks of temple tourism in Cambodia and Thailand with a short trip down the Mekong River. We liked the idea of getting a taste of Laos, and the relaxation would be welcome before we flew back to hectic Bangkok.

The Mekong River begins in the middle of China, carving its way south from the vast Tibetan Plateau, eventually forming the border between Myanmar and Laos, then between Laos and Thailand. The waterway winds through Laos, Cambodia and Vietnam, finally draining into the South China Sea.

It’s a 2,700-mile-long journey, of which Kathryn and I would see a small but interesting stretch. For two days we floated from the far northern corner of Thailand through the Laotian countryside to Luang Prabang, the former capital famous for its colonial architecture and nuanced French-Asian cuisine.

Most cruise passengers spend the night before departure in the Thai city of Chiang Rai, then hire a taxi for an early morning two-hour drive east to the international bridge in Chiang Khong. (We stayed at our friend’s farm near the departure spot.) At the bridge, representatives from the host company, Luang Say Cruises, drove us to Houei Say, a small Laotian town across the river, where we would board the Pak Ou. 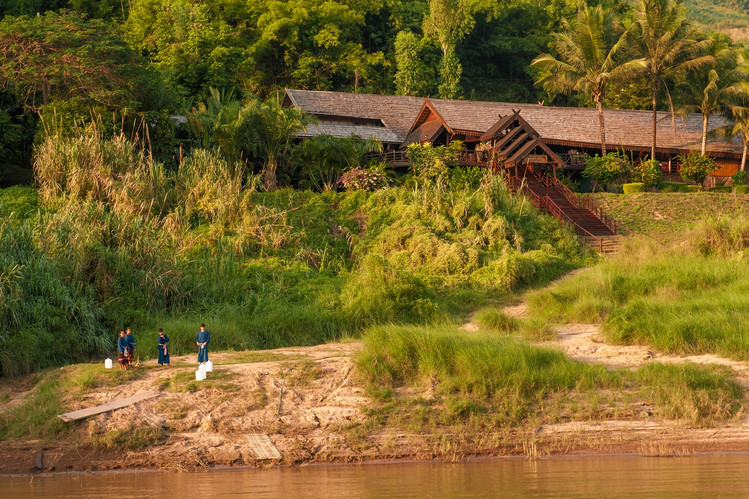 The Luang Say Lodge, where passengers spend a night during the two-day cruise.
Roger Toll for The Wall Street Journal

The Pak Ou resembles a classical wooden riverboat of French Indochina: gracious, open on both sides and gently arced like a smile. The pilot steered from a perch near the bow, above the crew’s cabin, where he sat cross-legged. We settled into cane lounge chairs in a large, shaded seating area in the center of the boat, and accepted a glass of cold kiwi juice and a cup of hot tea. 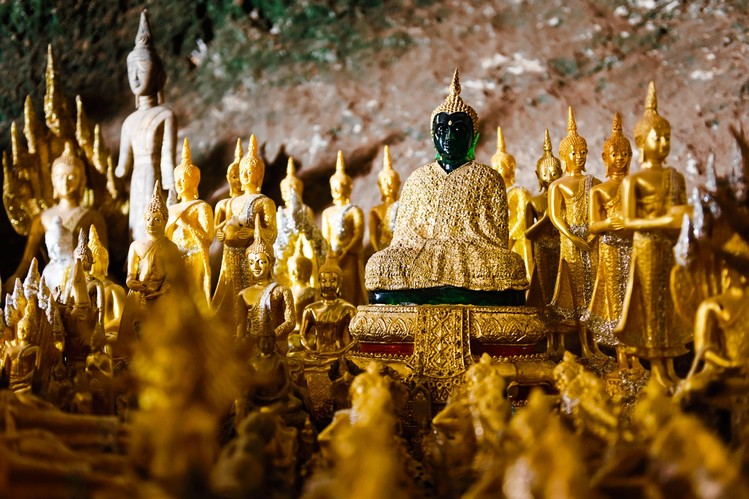 For about two hours, we cruised along the border of Thailand and Laos. Soon, the Mekong swung eastward into Laos and meandered past forested foothills and plots of string beans, corn, bananas, papaya, tobacco and rice. At times, the foothills rose into precipitous cliffs and dense jungle. Sharp granite outcroppings, like rocks in a Japanese sand garden, punctuated the river along much of the route, creating eddies and swirling whirlpools. It takes a skilled pilot to know how to negotiate the hazards, our onboard guide, Somphet La, told me as we stood on the small foredeck enjoying a soft breeze and an unobstructed view.

We saw boys casting fishing nets, men working in fields and long, narrow boats ferrying people from shore to shore. Riverside villages of mat-sided huts and tin roofs slid by. An elephant was feeding on a pile of cut grass at the river’s edge just feet from a couple in a beached boat. High-speed longboats occasionally roared by; some occupants wore motorcycle helmets. “The wind at high speed is tiring,” Mr. La explained. “[Helmets] can also be useful if you crash into a rock.”

Though life along the river was fascinating, we jumped up when lunch was announced, as eager for the diversion as for the food. The buffet meals served on board were delicious—curries, fresh fish steamed in plantain-leaf packets, stir fries of green leafy vegetables and desserts of tropical fruit. Kathryn and I sat at a low table and talked with a couple of genial Brits who had retired to Cape Town, a Belgian tech executive based in San Francisco and a Dutch mother and daughter. We were the only Americans among nearly 25 passengers.

We soon pulled alongside the bank to visit Ban Houy Phalam, a village of Khamu and Hmong, animist tribal people from the hills. In recent years they have migrated to the lowlands for better farming and easy access to water and markets. Mr. La led us along dirt paths between shacks on stilts, past playing children who eyed us warily and napping dogs. A small building with a sign, Women Mobilization for Development, housed a donation box inside. We dropped two 10,000 Laotian kip notes into it, hardly $2.50 yet a respectable sum here. We only saw a few men in the village, all with bowed legs and gaunt faces—presumably younger men were busy tending crops.

As the boat reached our lodging for the night, the low-hanging sun colored the Luang Say Lodge a bright rose. We climbed a long wooden stairway from the riverbank to a terrace where tables were set for dinner. Servers offered cold towels, tropical drinks and keys to our rooms. Each of the hillside guest pavilions had a view of the river. They reminded me of resorts on French Caribbean islands, with their louvered windows and mosquito nets teepeed over the king-size beds. After a tasty Lao dinner, a troupe of children from a neighboring village danced to folk music played by four very old men on traditional three-stringed instruments. In bed, we fell asleep quickly, and the wake-up call came too early in the chilly morning.

By the time we reached Ban Baw, the second village on the itinerary, the weather was ideal. Baw village is home to the Lao Loum, who are indigenous to the lowlands. We passed a Buddhist temple and monastery, painted in traditional red. The yellow-cloaked abbot sat on a bench in the morning sun, teaching an aspiring monk Buddhist sutras. At a nearby school, we gawked into busy classrooms through open windows, and later admired the work of women who were weaving colorful cotton scarves on rustic looms. Others sat on the ground, their work displayed around them, offering no more salesmanship than an imploring look in their eyes. Kathryn bought some gifts while I sampled rice whiskey distilled in an open barrel under a flowering tree. It seemed decent enough to buy at first, but we ultimately poured it down the sink of our hotel room.

Our penultimate stop was Pak Ou Caves—for which our boat was named—a pair of caverns set into a riverside cliff that house nearly 3,000 Buddha figures made from bronze, wood and stone. Fifteen miles upriver from Luang Prabang, it’s a popular tourist outing and a short hike up from the wharf. Mr. La explained that for centuries local people have brought Buddha statues to the caves in a sort of pilgrimage, and thus the caves are considered sacred.

“What did you like the most?” I asked Kathryn as we sat on the small bench on the bow watching for the first signs of Luang Prabang. She thought a moment. “The people,” she said. I agreed. Whether the staff on board the boat, the villagers with whom we exchanged glances, the local children who danced for us or the women who carried our bags up the steep lodge stairs with laughter and smiles, they were what most impressed us on the river through Laos. 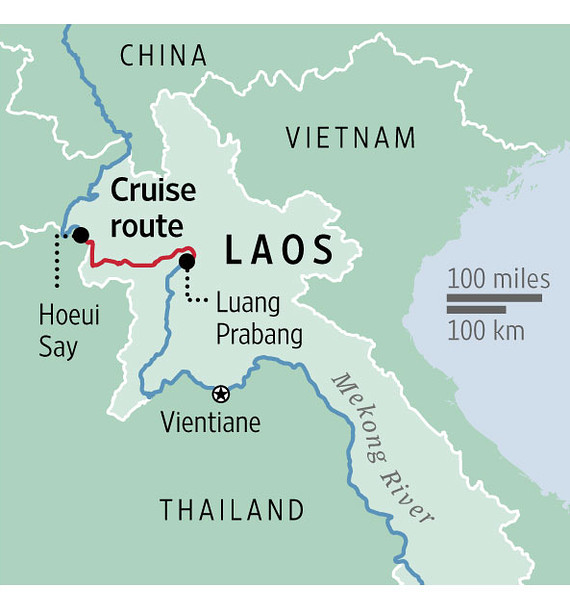 Getting There: Thai Airlines flies from Bangkok to Chiang Rai; from there, it is about a two-hour drive (approximately $85 by taxi) to the twin border towns of Chiang Khong, Thailand, and Houei Say, Laos. Luang Say Cruises representatives help with immigration and the company provides transportation to the boat. Lao Airlines flies between Luang Prabang and Bangkok, Siem Reap and Hanoi.

Cruising There: The two-day Luang Say Mekong cruise runs between Houei Say and Luang Prabang (from $405 a person, including all meals and one night at Luang Say Lodge; luangsay.com ).

Staying There: Le Meridien Chiang Rai Resort is situated on the river just outside the town center (from about $110 a night; lemeridienchiangrai.com ). In Luang Prabang, a special cruise-and-hotel package includes the cruise plus meals and two nights in the French colonial-style Luang Say Residence (from $701 a person, luangsayresidence.com ).