The government expects that the export value of mineral commodities, including copper, gold, metal and silver, will fall short of the target after output at mines has dropped this year.

A target of 15 trillion kip had been set for the export of mineral commodities but a more realistic assessment now puts the export value at around 10.8 trillion kip, according to the Ministry of Planning and Investment.

The shortfall is due to the declining output at some mines, along with a drop in the price of minerals on the world market. In addition, some mining operations have been unable to operate as planned due to technical issues.

During the first six months (Q1 and Q2) of this year, Laos earned 5.3 trillion kip or 35.8 percent of the target for 2017, Minister of Planning and Investment Dr Souphanh Keomixay told a meeting between government cabinet members, the Vientiane mayor and provincial governors last week.

In light of various issues surrounding mineral production, the government is now aiming for an export target of 10.9 trillion kip, he said.

The mining industry is a priority sector for socio-economic development through the revenue it generates and is an important driver of economic growth. It also supports community development and poverty alleviation.

In 2012, the government suspended the approval of new mining projects, while some companies were ordered to cancel their agreements after they failed to comply with environmental guidelines and did not pay the requisites taxes to the government and local communities.

Last year, the government gave approval to 163 domestic and foreign companies for the prospecting and exploration of mineral deposits.

Twenty companies are conducting feasibility studies, 22 are in the process of building infrastructure, and 58 companies are either exploring for minerals or extracting them, according to a report from the ministry.

From 2011-2015, some 20 types of mineral were extracted, inclu ding potash, bauxite, lignite, copper ore, gold ore, limestone and tin ore, with output averaging about US$7,734 million.

The government has received about US$1,194 million from taxes paid by miners in the form of concession payments, royalties, salary tax, dividends and value-added tax. 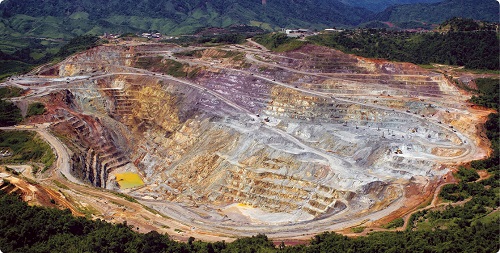