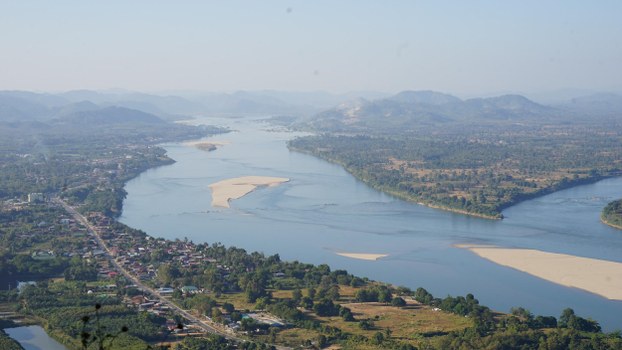 A section of the Mekong river in Laos has changed color from muddy brown to blue—a warning sign indicating poor health in Southeast Asia’s most important waterway.

The blue color is a result of a lack of sediment in the water, brought on by this year’s drought conditions and the effects of dams on the river and its tributaries, both inside Laos and upstream in China as well.

Chay, a resident of Khammouane province, told RFA’s Lao Service on Dec. 19, “Right now, the Mekong River is so dry that rocks and sand are exposed, so trucks can run down to the river bed to collect them as construction materials.”

“Now, it’s December and the Mekong River is already this dry, so ( when dry season hits in) April it will certainly get worse, much worse,” she said, adding, “the Mekong won’t have any water at all if the dams decide not to release water.”

Experts believe that the river’s strange hue at this time of year is a very serious problem, more serious than simply the aftereffects of a single drought.

“We should not be fooled by the light quality of an emerald blue river,” said the Stimson Center’s Brian Eyler in an exclusive interview with RFA on Dec. 13.

“An emerald blue river at this time of the year is actually a very unhealthy sign,” said Eyler, the director of Stimson’s Southeast Asia program and an expert on transboundary issues in the Mekong region.

Eyler said that the river’s color signals a bleak future for the Mekong.

A group of experts and members of environmental NGOs in Thailand have studied changes in the Mekong from January to December this year and concluded that dams were a major factor in exacerbating drought conditions that led to the river’s water clearing up. They presented their findings at a conference in Bangkok on Dec. 13.

“The Mekong river is dry because of the dams upstream,” said Montri Chanthawong, the director of Mekong Butterfly, a Bangkok-based environmental organization.

“China has a plan to build up to 37 dams, and has completed 10 or 11 dams,” he told RFA shortly after the conference.

“These dams retain more than 40 trillion cubic meters of water, 90% of the total flow. Only 10% of the water is released downstream,” he added.

In addition to the Chinese dams mentioned by Chanthawong, Laos itself is aggressively damming the river.

A fisheries expert who also attended the conference also blamed the dams for the conditions.

“The Mekong river is dry because of all the dams in the Mekong and its tributaries. The dams block most of the water,” Chaowalit Withayanont told RFA.

“The water has turned blue because it is clear enough to reflect the color of the sky. It’s clear because there is no sediment in the water and the dams are blocking all the sediment,” Withayanont said.

The leader of the Thai Chiengkhong Love environmental group told RFA that the river might not recover.

“The MRC (Mekong River Commission) stated that sediments in the Mekong delta would disappear in 2040, but it looks like it’s already happened,” Roikeaw said.

A Lao environmental official in Vientiane who declined to be named said that Lao authorities have yet to study the Mekong’s color change.

“I feel bad and concerned about the change. I think that the Mekong has reached a critical stage,” she said.

The lack of sediment in the water has had a negative impact on farms and fisheries.

“Many species, including small and large fish, have become extinct, while farmers can’t even grow vegetables on the Mekong bank [anymore],” the coordinator of the Thai Northeastern Mekong Network told RFA.

Laos has built dozens of hydropower dams on the Mekong and its tributaries in its quest to become “the battery of Southeast Asia,” exporting the electricity they generate to other countries in the region, and is preparing to build scores more dams in the years ahead.

Though the Lao government sees power generation as a way to boost the country’s economy, the projects are controversial because of their environmental impact, displacement of villagers, and questionable financial arrangements.