The number of crimes in Vientiane continues to rise despite police efforts to crack down on the criminals, according to a weekly report from Vientiane Police Headquarters on Wednesday.

From July 17-23, a total of 54 criminal cases were recorded in the capital, six more cases compared to the previous week, with robbery among the major crimes this week.

Some of the more brazen crimes recorded by police included: The robbery of Ms Mee Malayvieng, aged 24, a trader from Dongpalaep village in the capital’s Chanthabouly district. On July 17, she rode with her niece on a motorbike to visit her relatives in Donkoi village, Xaysettha district.

At around 2pm she went out from her relative’s house and shortly afterwards, two criminals followed her, using a motorbike without a number plate. The criminals rode their motorbike up beside her and used a sharp implement to threaten her before taking her motorbike, jewelry and other properties to escape the scene. Police are looking for the criminals.

Another incidence was the robbery of Ms Kanchana, aged 26, from Mixay village in Chant habouly district. At 11am of July 17, she went to withdraw 200,000 baht (50.3 million kip) from a bank and then rode her motorbike back home. When she arrived at Chao Anouvong park, two criminals who were following her on a motorbike pulled up beside her, using a pistol to threaten her to stop her motorbike before snatching her bag and taking all her money.

Another case happened in Dongkalao village in Sikhottabong district on July 22. The incident occurred when four criminals used a pistol to plunder a steel supplier in Dongkalao village. Staff at the shop feared being killed so they gave all the cash, amounting to 63,000 baht (more than 15.8 million kip) to the criminals, who escaped the scene on motorbikes.

Meanwhile in Nonsavang village in Xaythany district, a gang of criminals broke and entered the house of Ms Vanmany, aged 45 but escaped with only a laptop before running away.

Moreover, on July 19, a Japanese man drove a rental van to a massage shop near Patouxay Monument. While enjoying his massage, he left a bag on the roof of the van. After finishing the massage he drove the van to his hotel and noticed that his bag had been broken into and all the cash and other property was gone.

Many motorbikes were also reported stolen last week. Most of those arrested by police were unemployed, indicating that crime may be on the rise due to economic pressures.

Meanwhile, Vientiane police are chasing the criminals, focusing on target groups and warning the public to take necessary precautions against crime, which is becoming more of a threat to residents in the capital.

The crimes not only result in the loss of people’s properties but also affect public security in Vientiane, prompting the police to work harder to ensure the safety of people in the capital.

Death From Below In The World’s Most Bombed Country
Laos Crash Plane Partially Salvaged
Share This Post: 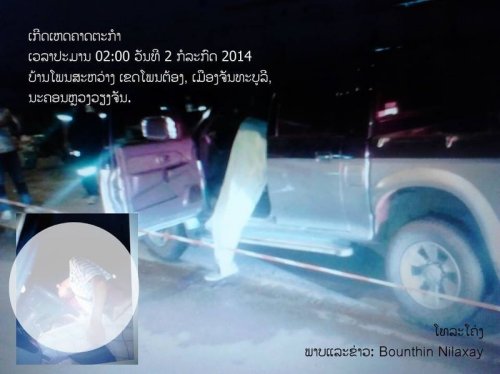