Recent times have seen the emergence of a dangerous trend that would adversely affect elephant populations everywhere. This is the growing demand for the skins of elephants, especially, of the Asian elephant.

A study, started by an England-based non-governmental organisation called the Elephant Family, has made some startling revelations in this respect. They have carried out a detailed survey of the illegal elephant skin trade that has been in operation since 2014, the results of which are now documented in a publication called ‘Skinned – The growing appetite for Asian elephants’.

The trade in elephant skin products seems to have started in about 2006 in Myanmar, and has now attained a steady annual growth. The skin of an elephant is used to manufacture beads, powdered skin, pieces of treated skin, etc. The powder is used in Chinese-based traditional medicine and pharmaceutical processes which sell under Elephant Skin Powder. Initially, powdered elephant skin was sold as an ingredient in traditional medicine. Thereafter, a new trend emerged where dried elephant skin was carved and polished into prayer beads and other Chinese collectibles with traders extolling the qualities of the blood red hue in the translucent subcutaneous layers.

Elephants are killed, and the skin removed in strips or in large square chunks. Whatever the method used, a large part of the skin not suitable for processing, is left and wasted. There seems to be no justification for killing an elephant for a small part of its skin. 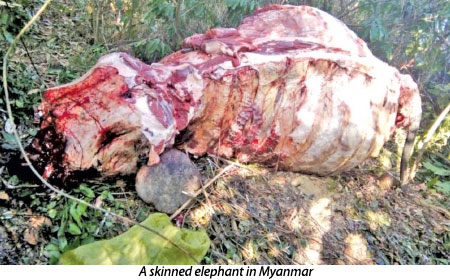 The skin pachydera of an elephant, is 1.9 – 3.2 cm thick. It is thickest on the hind limbs and hindquarters, thinner on the forelimbs and shoulders, and is thinnest on the inside of the ears and around the mouth and anus. The skin though thick is sensitive. The colour of the skin is dark greyish black over most of the body but lighter on the head, trunk and ears. Though the elephant’s skin seems to be tough, it is sensitive in certain areas and susceptible to the ravages of heat and insect pests. Since the skin of an elephant is thick it cannot cool its body easily The warm blood cools as it circulates through the veins in the ear, due to the thin layer of skin that covers the ear. The cooled blood then circulates back into the body, helping reduce the overall body temperature of the elephant. Even though the Asian is the preferred elephant species, skin from the African species is also used. If the skin is needed from a particular part of the body, then the elephant killings will unnecessarily destroy more elephants than are actually needed for the illegal trade.

There is little doubt that the skin trade is alive and is a developing threat to Asian elephants across their range. The Asian elephant is found in the wild in thirteen range states. Their total number has been estimated at between 35,000 and 45,000. In the last century an estimated 90 percent population loss was recorded across their 13 range state, with habitat loss being the main threat. Over 15,000 Asian elephants are held in captivity around the world in zoos, entertainment centres, private ownership and trekking camps.

History has shown that poaching and wildlife trafficking spreads rapidly across countries and continents. The growing number of skin poaching incidents in Myanmar, and the spread of trade across Myanmar, Laos and China shows that this is already happening. Traffickers are actively developing new ways to market elephant skin products, and are selling them to apparently willing customers.

However, the wild elephants in Sri Lanka are not at risk of the demand for elephant skins for the production of ornaments and medicinal powders. The skin trade is in Myanmar where there are plenty of wild elephants. Even so we must be vigilant to ensure that no elephants are poached for the skin trade in the future.

The populations of both, the African and Asian species of elephants are threatened due to conflicts with people, habitat loss and poaching for their ivory. However, the Asian species are also threatened by the illicit live trade for the entertainment industry and the recent poaching for the illegal trade in their skins. The entertainment industry consists mainly of circuses, where elephants are a great attraction.

The International Union for the Conservation of Nature (IUCN) through the Convention in Trade in Endangered Species (CITES) has recommended that, “All elephant range states have in place legislative, regulatory, enforcement, or other measures to prevent the illegal trade in live elephants”.

Videos posted on marketing sites show images of backyards in Myanmar and Laos being used by traders to carve up chunks of elephant skin, remove the coarse hair with blow-torches and dry it in ovens before grinding it into a fine powder.

The most effective way in which this trade could at least be reduced, if not stopped altogether, is for people not to purchase elephant skin products or ivory products.

However, this would not be a solution if man’s greed to have these items continue. If on the other hand, there is no market or demand for elephant products the elephant will have only an aesthetic value and not a commercial value.