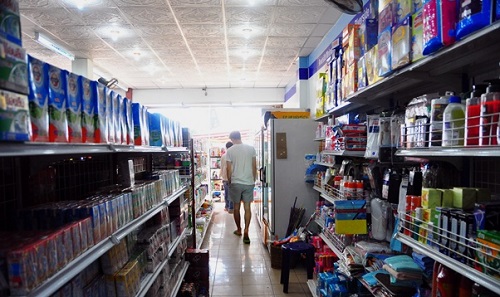 Foreigners are prohibited from operating trading outlets or shops whose investment cost is less than 8 billion kip (US$983,380), so that small-scale businesses are reserved solely for Lao nationals, according to a new regulation.

Minister of Industry and Commerce Khemmani Pholsena last month issued a ministerial decision on the establishment of shopping centres and department stores which provided a legal frame of reference for such developments.

Under the ruling, foreigners are prohibited from investing in a specific trading shop, convenience store, mini-mart, wholesale or retail shop whose investment value is less than eight billion kip.

However, foreigners may hold a 100 per cent share in a shopping centre or shopping mall whose investment value is 160 billion kip or more.

Non-Lao nationals are permitted to hold up to 70 per cent ownership in a shopping centre or shopping mall whose investment value is less than 160 billion kip but not less than 80 billion kip, according to the ruling.

Foreigners may hold a share of not more than 51 per cent in a shopping mall or shopping centre where the investment cost is less than 80 billion kip but not less than 8 billion kip.

The ruling also stipulates the area of land on which developers can build shopping centres and malls in a bid to ensure sufficient parking space is provided.

Developers of shopping centres are required to secure a site of at least 50,001 squares metres for a single shopping centre in order to provide essential services, while developers of hypermarkets must secure a space measuring 20,001 to 50,000 square metres. Companies wanting to build a super centre or supermarket may build on a smaller plot.

Developers are required to begin construction within two years after being granted a concession by the government.

This stipulation is intended to address the problem of developers not beginning construction of shopping malls for several years after being a granted concession, as has happened previously.

The new ruling also prohibits the original concession holders from selling the concession to another developer without approval from the relevant government department.

The decision applies to all shopping centres and department stores regardless of the source of investment – whether from Lao or foreign individuals, any legal entity or organised group.

Officials told Vientiane Times yesterday that a regulation issued some years ago, which allows foreigners operating a wholesale or retail shop without a business licence to apply for a licence if the value of their business reaches two billion kip, needed to be revised to match the new ruling.