While touring through Vientiane one will encounter French colonial Villas and administration buildings, old Lao town houses, hidden and forgotten shrines of Vientiane’s guardian deities, small spirit houses and famous temples. Among those last ones are Wat Si Muang – where the city pillar of Vientiane is located -, Wat Sisaket – which miraculously survived the Siamese invasion -, or Wat Ho Phra Keo, the former temple of the revered Emerald Buddha.

igon, Hanoi or to a lesser extend in Phnom Penh, by touring through Vientiane’s present one will experience its French past…

French Colonial Villas (ADB) at the junction Lane Xang – Samsenthai, which belong to the first section of French colonial construction in Vientiane. This first phase of construction took place in 1914 to 1930.

The Sacred Heart Church was constructed between 1914 and 1930 east of the main administrative district.

The church served the French colonists and the Vietnamese administration staff. 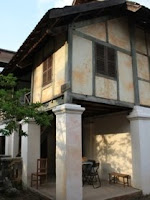 Lao colonial houses built for the local elite during the French occupation of Laos. This type of house was built until 1950.

Nowadays many of these houses have disappeared . 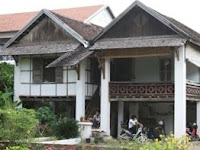 Lao housing from the French colonial period is clearly different from other colonial housing styles as well as from traditional Lao housing and architecture.

This Lao colonial house is built on stilts and the walls are made of torchis (mixture of straw, lime and sand) covered with whitewash – another characteristic element of this period. 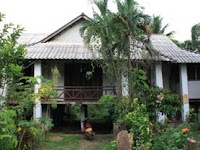 This Lao colonial house is characterized by the use of architectural structures such as twin gables, a large covered

balcony, from the outside visible access points and the significant use of wood.

The use of bricks however is a contribution from the European architecture.

While the French colonial government established national libraries in Vietnam and Cambodia, they only created a small city library in Laos.

In 1956 this library became the Vientiane General Library.

Since then, the Library has been moved several times until it became the Lao National Library in its current building on Samsenthai Road.

The Education Printing Office was first constructed in 1910/11 and used as a school. The school was part of the core establishment of colonial buildings I Vientiane area.

Constructed 1925 as Hôtel du commissariat, was then used as Ministry of Defence. 1980, it was turned into the Revolutionary Exhibition Hall. 1985, it was upgraded to become the Lao Revolutionary Museum. In 2000 it was re-established as the Lao National Museum.

Namphou Fountain belonged together with the area around That Dam to the second settlement zone during the French colonial area. At the Northeastern corner one can find the former police station, built in 1921 – nowadays the Vietnamese tourism office.

Insurance To Be Compulsory For Travellers To Thailand
Police Warn Of Rainy Season Thefts
Share This Post: