The government has vowed to address any barrier that hinders business operation and investment in Laos to boost socio-economic development of the country.

Prime Minister Thongsing Thammavong yesterday told business executives that the government would take all their recommendations and proposals into the cabinet’s agenda in a move to bring about a good business operation and investment friendly climate.

Business operators called for the government to introduce clear export and import related policy giving more incentives for their business operations, according to the Prime Minister.

They also asked for facilitation to ease their access to finance, markets, energy, labour forces along with the introduction of tax incentives.

The Business executives urged state sectors to streamline procedures to facilitate business operations using quick and transparent methods, notably in relating to approving business processes after learning that there are too many steps involved.

According to the Prime Minister, construction businesses called for the government to pay debt it owed to the investors for various development projects.

The Prime Minister described this (paying debt) as the hottest issue amid current budget tensions faced by the government.

The Prime Minister promised to take these issues, recommendations and all the other issues raised at the meeting into consideration.

The Prime Minister instructed authorities at all levels to take prompt action to review and streamline procedures in a move to better facilitate business operation and investment.

He asked the authorities to consider the promotion and facilitation of business operations as ‘their political responsibility’.

The Prime Minister pressed on the need for Lao businesses to improve their business capacity ahead of greater integration with region as the Asean Economic Community is due to start in 2015.

He asked the LNCCI to improve its performance in order to help its members in a move to prepare Lao businesses for the integration.

Mr Thongsing suggested relevant sectors work together in seeking and securing markets so that goods manufactured and produced in Laos have custmers available .

In addition, he instructed officials to make sure that all development projects will be implemented within appropriate timeframes after they are approved by the government. 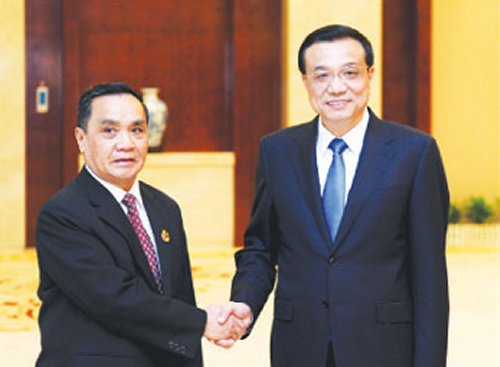