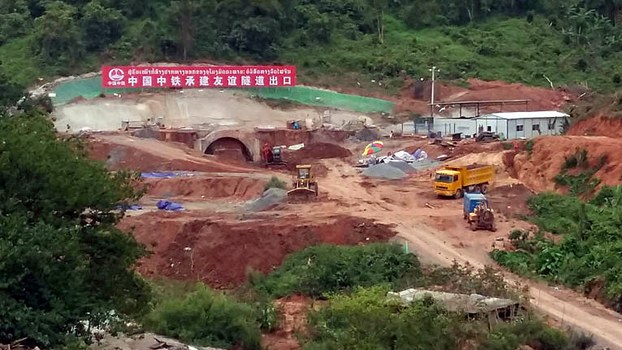 More than 4,400 Lao families are being forced to relocate to make way for the U.S. $6 billion Lao-Chinese high-speed railway whose construction began nearly a year ago as part of a longer rail project that will link China to mainland Southeast Asia, a public works ministry official said.

Provincial task force committees in areas through which the railway will pass have estimated that 4,411 families must be relocated along the planned 420-kilometer (261-mile) route through Laos, according to Rattanamany Khounnivong, deputy minister at the Lao Ministry of Public Works and Transport and one of the heads of the construction unit for the single-track, standard-gauge rail network.

The task force committees, which are in charge of determining the number of families affected by the project, are still evaluating how many will be forced to relocate, Rattanamany said, adding that he believes the figure will not change.

Though more than 3,800 hectares (9,500 acres) of land have been reserved for the mega-project, the total number needed will likely be less than previously estimated, he told RFA’s Lao Service.

Stretches of the track that lie outside safety zones where trains must slow down will not require 50 meters (164 feet) of land on both sides, he said.

“After a [further] demarcation and survey, the areas reserved for the railway will require less land, so the figure must be recalculated,” Rattanamany said.

Huge infrastructure projects, including dams, in Laos undergo at least three surveys so that the government can arrive at a final fair figure for compensating those who have lost their homes and farmland.

The ministry is working with the provincial task force committees to finalize compensation schemes for those who are forced to relocate, Rattanamany said.

Under Lao Decree 84 issued in April 2016, those who lose land to development projects must be compensated for lost income, property, crops, and plants.

Project owners are required to guarantee that living conditions for those displaced will be as good as, or better than, they were before the project was started.

So far, nearly 14 percent of the railway has been completed, and workers are currently boring 119 tunnels with a total length of 23 kilometers (14 miles), Rattanamany said.

The massive project requires more than 7,000 local workers, he said.

“The majority of those recruited are Lao workers who reside near the project, and they are digging tunnels and building a bridge across the Mekong River,” Rattanamany said.

Workers have been blasting tunnels in mountains, building bridges and roads, and clearing land for stations and substations along the planned rail line in the three northern provinces of Luang Namtha, Oudomxay, and Luang Prabang since construction on the railway got under way late last December.

Thousands have already been recruited to work on the railway in the provinces, including about 2,000 in Luang Prabang, said a provincial official from the area who declined to be named.

More than 1,000 Lao workers have been recruited in Luang Namtha to build the railway, according to an official from the provincial Public Works and Transport Department.

They are receiving monthly salaries of U.S. $200-U.S. $800, said the official who requested anonymity.

In the meantime, some villagers who have been forced to leave their homes say they are still waiting for compensation from the government.

“We know we will be compensated for sure, but we have no idea when we will get paid,”  a resident of  Luang Prabang who had to give up his house and land for the project told RFA on Monday.

Previously, the government took into account only the cost of roof bricks and other material when determining what to pay villagers for the loss of their homes, said the man who requested anonymity.

“But officials have not come to talk about compensation for the land,” he said.

Landlocked Laos expects the railway to lower the cost of exports and consumer goods while boosting socioeconomic development in the impoverished nation of nearly 7 million people.