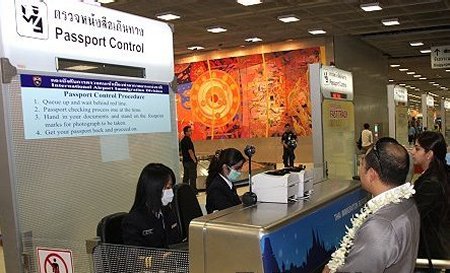 Immigration Police in North East Thailand have announced the start of a major crackdown on foreigners entering the country posing as tourists, who it believes are in fact working illegally in the Kingdom, said Pol Major General Chartchai Lamsaeng at a seminar for immigration officers held on Monday in Khon Kaen.

This latest crackdown is to also target foreign nationals on border runs and those who have re-entered Thailand a considerable number of times using tourist visas over a prolonged period.

Following an ongoing and thorough investigation into foreign visitors, the Immigration Bureau found repeated patterns of irregularities, with some foreign nationals re-entering the country as many as 60 times, each for a duration of between 15 and 30 days.

Further investigations found that out of those who regularly re-entered Thailand, large numbers came from neighboring countries such as Laos, Vietnam, Cambodia and Myanmar, with many going to work illegally in factories, restaurants or on construction sites and fishing boats.

Immigration Police have now stepped up operations across all twenty provinces in the northeast and in particular at the permanent checkpoints of Mukdahan, Ubon Ratchathani and Nong Khai – all of which are widely used by people leaving and then re-entering Thailand on border runs.

At the three aforementioned checkpoints all foreign nationals will be screened if they have entered Thailand four or more times without sufficient reason. Officers have also been instructed to look closely at the credibility of each individual, regardless of their nationality, in deciding whether to deny them entry to the kingdom.

Pol Major General Chartchai went on to say that high tech identity scanning machines will be installed at all entry points throughout Thailand and electronic processing will also be implemented nationwide. The data obtained will then be cross-referenced with the central immigration database which holds detailed information on all of the 40,000 foreigners who are currently blacklisted from Thailand. The checkpoint data will also be used to help combat those individuals involved in the smuggling or transportation of illegal or undeclared goods into Thailand, as well as in assisting in matters of national security.

As he closed his speech, Pol Major General Chartchai warned his fellow immigration officers of the harsh penalties they can expect to face should they be found to be involved in any illegal practices with regards to aiding and abetting foreigners who enter the country illegally. Warning For Visa Applicants At The Royal Thai Embassy, Vientiane