The Lao government will now allow the importation of motorcycles with engine capacities of greater than 250 cc’s, lifting a previous ban on the bikes as part of efforts to comply with World Trade Organisation obligations.

The cabinet has approved a proposal by the Ministry of Finance made few months ago, giving the green light for tax officials to collect taxes from vehicle importers, one of the main players in the motorbike registration processes in Laos.

According to the government sponsored magazine, The Manager, which is published by the Public Relations Department at the Government Office in December, the cabinet agreed in principle that the government will charge motorbike taxes in accordance with engine power. Vehicles with greater engine power will attract higher taxes.

The magazine did not provide details as to when the government will begin implementation of the cabinet resolution on motorbike imports.

In the past, the government banned imports of motorcycles with engine capacities of greater than 250cc’s in an effort to prevent criminals utilising high powered bikes to evade arrest by the police.

In the past, the police had few powerful motorbikes to catch the criminals, therefore it was better to prevent the importation of high powered bikes into the country. Things have been changing over the past several years; the government has a greater budget to provide police with vehicles and modern tools to fight against crime in the country.

Laos has no more reasons to ban the import of the vehicles since the country became a member of World Trade Organisation, adding that the motorbike import ban could violate the world trade body’s regulations.

One of the main WTO regulations is that each WTO member must not ban the import of goods without concrete reasons, an official from Ministry of Industry and Commerce said, adding that banning the sale of motorbikes with engine power above 250 cc’s is not really an effective crime fighting solution.

According to WTO regulations, Laos must provide fair treatment for business people who run businesses in Laos.

Laos will have to stop police from using motorbikes with engine power above 250 cc’s if it wants to ban the import of powerful motorbikes for commercial purposes.

The government’s decision to allow the import of more powerful motorbikes will not only provide opportunities for businesspeople to trade, but also satisfy rising demand for bigger bikes in Laos.

People with high incomes want to use the vehicles for tourism and sporting activities. Laos has potential to provide places for motorbike racers to contest due to cheaper land prices, which might encourage businesspeople to invest in the construction of motorbike racing fields in the country. 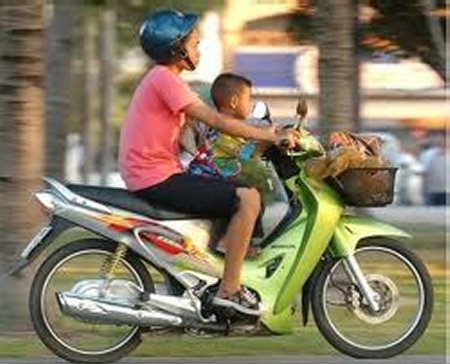 Ride on! Motorbikes and Scooters in Laos