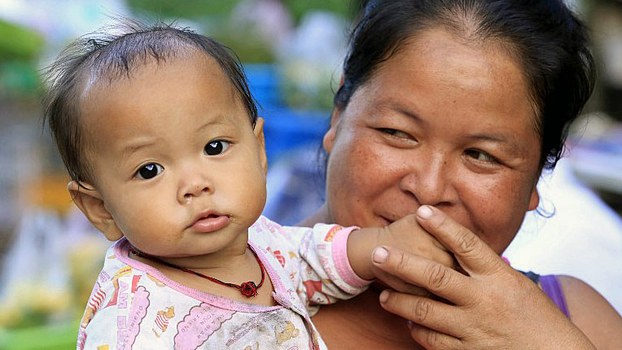 Lao officials have ordered a clinic in the capital Vientiane to shut down amid indications that it is using Thai women to provide illegal surrogacy services to infertile couples, an official from the Lao Ministry of Public Health said.

The move comes amid signs that a commercial surrogacy industry is growing in the small impoverished Southeast Asian nation.

The official, who agreed to speak to RFA’s Lao Service on condition of anonymity, said the facility, which he did not mention by name but which is known as the VIP Clinic, was shut down on May 24 after relevant bodies checked it and discovered that it was operating without a permit from the ministry.

The clinic, which offers “consulting services” to well-off infertile couples and pregnant women, is now being investigated by anti-human trafficking police, he said.

“The clinic was illegal, or operating without permit,” said the ministry official. “The anti-human trafficking police also came and requested some related information from us.”

The official went on to say that the relevant bodies could not determine if the clinic, located in a house along the Kamphaeng-Meuang road in Nonghay village in Vientiane’s Hadshaiyfong district, had definitely been providing surrogacy services supplied by Thai women, as suspected by Thai officials at a nearby border checkpoint.

“We went to the VIP Clinic and checked it carefully, but we do not know if it has been offering any surrogacy services there,” he said.

“Now, we’ve handed the case over to the anti-human trafficking police, and we have provided them with related information when we found out that that clinic was operating illegally,” he said.

Ministry of Public Health regulations do not allow human organs and human cell tissue to be sold, he added.

When RFA contacted a clinic staff member by phone in late April after suspicions about the facility surfaced, she denied comments made by Thai authorities, and said the facility was providing consulting services for couples with infertility problems and pregnancy services for women.

RFA called the clinic again on May 24 when the ministry said it had ordered it to close, but the person in charge of the facility’s management refused to answer any questions.

Surrogacy agencies and fertility clinic recently started operating in landlocked, communist Laos, according to the nonprofit organization Families Through Surrogacy.

Though Laos has no laws or restrictions pertaining to surrogacy services, neighboring Thailand and Cambodia have taken measures to eliminate illegal surrogacy amid growing concern about the exploitation of women who serve as surrogate mothers.

Thailand passed a law in 2015 banning foreigners from hiring Thai women as surrogates after high-profile cases sparked debate the previous year. Those found guilty of paying surrogates in Thailand can receive a maximum prison sentence of 10 years.

In November 2016, Cambodia banned surrogacy arrangements. But four months later, the foreign ministry said the government was preparing to draft a new law to make surrogacy legal “in order to control and prevent Cambodian children who are born via surrogacy from becoming victims,” according Families Through Surrogacy.

Thai authorities at the Vientiane-Nongkhai border checkpoint first became suspicious that the Vientiane clinic was providing cross-border surrogacy services after they arrested a 25-year-old Thai man for smuggling human sperm into Laos in April.

The man confessed that he was crossing the Lao border to deliver six vials of sperm packed inside a nitrogen tank to a clinic in Vientiane, a Thai customs officer said at the time. Authorities believed that the facility was the VIP Clinic.

A week after the man’s arrest, an official from the Lao health ministry told RFA that she was not aware of sperm smuggling activities or the existence of surrogacy clinics in the country.

“The ministry regularly inspects all clinics, and the clinics cannot do more than what is stated in an official document,” said the official who declined to be named. “If a clinic performs any illegal activities, it will be punished.”

During the weekend of May 20-21, Thai police arrested a Thai driver and six Thai women beteween 25 and 35 years old, and seized 45 vials of sperm and human eggs.

The women said a Chinese businessman in the Thai capital Bangkok paid for them to travel across the border to Vientiane the previous week to be artificially inseminated at a clinic.

During that time, they stayed in a hotel and received medical checkups at the clinic, but they were all deemed unfit to be surrogate mothers, the women said.

One of the women told police that she and her husband agreed that she would serve as a surrogate mother in exchange for a U.S. $10,000 payment.

Both Thai men caught at the border in April and May eventually told authorities that they were heading directly to the VIP Clinic in Vientiane, which triggered an investigation of the facility by Lao police.

Lao anti-human trafficking police told RFA on May 26 that they inspected the clinic and collected some relevant information.

Now the case is under careful review to find a solution to the problem, they said.

Police said that surrogacy services are a new phenomenon in Laos.

“We went out and gathered information, and we know well that the clinic was operating without permit,” said an officer who declined to give his name. “However, we are waiting for the order from our boss about what we should do.”

“Because we have never seen a case like this—a case of cross-border surrogacy—we consider it a new phenomenon,” he said.

The police said the next step will be to close down the clinic permanently because it does not have a permit from the Ministry of Public Health.

Lao and Thai authorities will work together on the case because the two countries have a memorandum of understanding that covers this type of joint investigative work, the officer said.

“We will inform you later about what we will do next,” he told RFA.

“This case has severely damaged the good standing of our medical sector,” he added.

The official from Ministry of Public Health told RFA the same day that the clinic was ordered closed that the medical sector does not allow any facility to provide an artificial pregnancy services.

He also said the ministry will create a specific unit to stop the VIP Clinic and any others like it from operating.

“If a clinic requests a permit to provide artificial insemination services, we will not allow it,” he said. “If we find that any clinic is doing this, we will withdraw the medical permit and order it shut down.”

“The enforcement of our regulations is being implemented step by step, but we will make sure they will be fully implemented in the end,” he said. “We handed over the case of VIP Clinic to the Vientiane and district-level administration and the specific unit that enforces medical regulations.”

The clinic held a grand opening ceremony in August 2016.

Authorities ordered it to stop operating once before, but it reopened a short while later until Thai authorities this April suspected it might be a center for cross-border surrogacy services, anti-human trafficking police said.

Reported and translated by RFA’s Lao Service. Written in English by Roseanne Gerin.