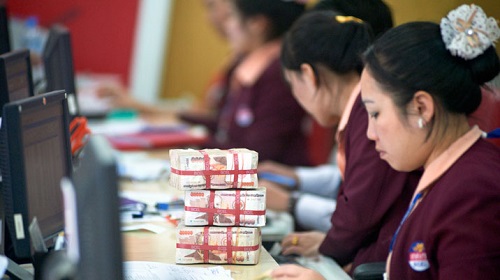 Laos’ currency is not over-valued, a trade ministry official said on Saturday, rejecting an IMF assessment that the kip was too strong for a country with a large current account deficit.

The Asian Development Bank expects the external deficit to widen to 20 percent of GDP in 2017 from 17 percent in 2016, a level considered dangerous for economic stability.

The International Monetary Fund said in its last country report, in 2015, that balance of payments trends in Laos suggested the currency was 10-20 percent over-valued.

Laohoua Cheoching, head of trade policy at the ministry of industry and commerce, told Reuters there were pros and cons to both weak and strong currencies.

“The Lao currency should stay stable. If you just … make the kip weaker – what is the benefit of it?” he said in a rare interview to western media, on the sidelines of an ASEAN economy ministers meeting in Vientiane, which holds the presidency of the 10-country group this year.

The kip (LAK=) last traded at 8,090 per dollar, some 1.5 percent stronger than a year ago. One reason why a weaker currency might be detrimental could be the high external debt of about 85 percent of GDP – but Laohoua did not comment on that.

He said the high deficit was “understandable” for a country trying to modernise and importing machinery and software to do so.

On government spending, he said cuts could be made.

“You look at the list of your expenditures … and if you find an unproductive project it should be revised or cancelled. The government is taking measures to tackle this.”

The Asian Development Bank sees the Lao economy growing 6.8 percent this year, having seen 7-8 percent annual growth in the past decade, albeit from a low base.

Luxury hotels have emerged from the tall weeds along the Mekong river, and SUVs compete with tuk-tuks on the increasingly busy Vientiane roads in a communist country where about a quarter of the people live below the poverty line.

Noisy Chinese-backed construction sites flank the western-style cafes in the centre of the capital. But most Laos live in the countryside and are dependent on subsistence farming.

ASEAN economy ministers said in a joint statement this week China’s slowdown and Britain leaving the European Union were key factors behind the region’s lower growth this year.

Laohoua said ASEAN’s lesson from Brexit was that economic integration should be more equitable.

“All stakeholders should enjoy the benefit of integration because if some group of the population is excluded then social tension will happen,” Laohoua said.

“We open the market but the openness should go with the provision of equal access to welfare, getting jobs, etc.”