In northern and central Laos,mountains seem to reign the area where population is scarce. There was almost nothing but primeval forests and traces of slash-and-burn cultivation left by mountainous residents.

However, since December 2016, within half a year since the beginning of construction of China-Laos railway, the area has been witnessing massive changes.

China-Laos railway starts from the Mohan-Moten border area between the two countries, running over 400 km to Lao capital Vientiane with designed operating speed of 160 km per hour. Over 60percent of the route are bridges and tunnels.

Construction of the railway is scheduled to be completed in five years with investment of some 37.4 billion Chinese yuan (5.56billion U.S. dollars). This is the biggest investment project of China in Laos so far.

Being the first overseas route connecting with the railway system in China using Chinese technology and equipment, China-Laosrailway is a major strategic project which was reached and promoted by top leaders of the two countries, a major project in infrastructure inter-connectivity between China and neighboring countries, and a major project in implementing the Belt and Road Initiative.

Ground-breaking ceremony of the railway was held in December2015, and the construction of the whole route officially started ayear later.

Within the first six months of construction, Chinese companies have built roads running through forests and drill tunnels halfway up the mountains.

The construction section of China Railway No.8 Engineering Group Co., Ltd. (CREC8) is located on Laos’ northern Luang Prabang area along the Mekong river, some 220 km north of capital Vientiane.

The Mekong River runs around the area, creating a peninsula surrounded by water and mountain. There had been no power supply in the area, thus living and production conditions were quite hard.

Thanks to the Chinese construction team, the area was officially connected to electricity grid in July. The “No Man’s Land” has now entered into the “power era”.

The most obvious change brought about by the construction of the China-Laos railway is the new roads running through wild forests in northern Laos.

In Muangxay-Luang Prabang area in northern Laos, the 1801provincial road used to be a narrow, steep and bumpy dirt road curving around slopes. After being included in the construction of China-Laos railway, the China Railway International Group set up a special maintenance team to widen the road and decrease slopes. Now the road is either covered with sand stone, or blacktopped.

According to Bai Qiang, Chinese Communist Party secretary of the railway section’s working committee, “local villagers said that thanks to the new road, local girls don’t have to worry about marrying afar, as the road is now so smooth and easy to get home after marriage.”

China-Laos railway is a big project under the Belt and Road Initiative. The railway runs through Lao mountainous area with many tunnels needed to be built, and now, along the route, it is easy to find advanced machinery and equipment in full operation alongside the thatched huts of local residents.

The Lao government hopes that the completion of China-Laos railway will bring powerful momentum to social and economic development, while the construction of the railway has already brought great changes in many areas along the route.

At Sinohydro Bureau 3 Co., Ltd’s railway construction site between towns of Luang Prabang and Vangvieng, local staffs outnumber Chinese workers. Nearby hilly villages have over 300people while some 20 of them have been employed to work for Sinohydro 3. Lao staffs are learning the advanced technology and management from their Chinese colleagues.

Nuanchanh, deputy chief of Phengsong village where the railway runs through in Vientiane province, some 70 km north of capital Vientiane, told Xinhua:” Local villagers are very excited after Chinese companies come to build China-Laos railway, and we welcome them here because this railway can bring a new look to our village.”

Nuanchanh said Lao villagers and departments at all levels will work closely with Chinese companies in construction of the railway.”We are looking forward to the completion of the railway which will improve Laos’ transport infrastructure, facilitate exchanges between peoples of the two countries, thus promoting tourism industry.”

Lattanamany Khounnyvong, Lao Vice Minister of Public Works and Transport told Xinhua that China-Laos railway is the top project in the eighth five-year plan of Laos, and is of great significance for Laos.

“We are now working to assist Chinese contractors in the construction of infrastructure such as roads, education and healthcare facilities in villages along the railway. This is of great significance to the implementation of the eighth five-year national plan of Laos”, he said.

Lao President of National Assembly Pany Yathoutou inspected the construction site of the railway in July.

“Laos-China railway is the project that has been promoted by leaders of the two countries. Management units and construction units must work closely together,” she said. 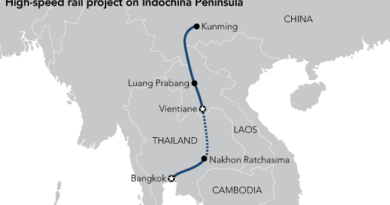