Laos will need to build four new international airports as the existing four at Wattay, Luang Prabang, Savan and Pakse will be unable to accommodate growing air transport in the coming decades, a minister told the Cabinet.

Minister of Public Works and Transport Dr Bounchanh Sinthavong told the recent meeting between the government cabinet, Vientiane mayor and provincial governors when he presented a strategic plan on airport development.

The planned expansion of the passenger terminal at Wattay International Airport would enable the airport to accommodate about three million passengers a year, which would make it capable of handling growing air transport until 2028, the minister said.

The airport which now has an apron that can accommodate 48 parked aircraft and can land as large as 350-seat airplanes has no more space available for further expansion as it is located near the city centre.

“A new international airport must be built outside the city. Construction of the new airport is expected to begin in 2025 and complete before 2030,” he told the meeting, referring to the strategic plan.

“It is expected that a new international airport will be in use by 2030.”

The new airport will be built to accommodate as large as Boeing 747, Airbus 330 or equivalent airplanes.

In addition, the minister stated that a new larger international airport in southern Champassak province also needed to be constructed with capacity to land 250-seat aircraft to meet the growing needs of air transport in the southern region.

He explained the current international airport, which could only land 150-seat aircraft, had limited space for further expansion as it was located near the city centre and a mountain.

But the minister did not explain when construction of the new airport should start or when it is expected to be in use.

Dr Bounchanh said the existing international airport located near the city centre had limited space for expansion. However, the minister did not give details about a time plan for construction of the new airport.

The minister told the meeting the new international airport in Luang Prabang province, which was opened for use in 2013, already experienced crowding at times within the passenger terminal. Despite this the airport’s capacity was expected to be capable of accommodating passengers until 2023.

He explained the rapid growth of passenger numbers to the world heritage town had made the airport more crowded earlier.

He said conditions of the existing location meant it could not be expanded but the minister did not disclose further details.

In addition, the government is also eyeing the development of regional airports in Xieng Khuang and Bokeo provinces adding to the regional airport in Attapeu province, which completed construction in April this year.

The strategic plan also spells out the need to improve domestic airports in provinces including Oudomxay, Luang Namtha and Xayaboury, while the one in Huaphan is under construction. 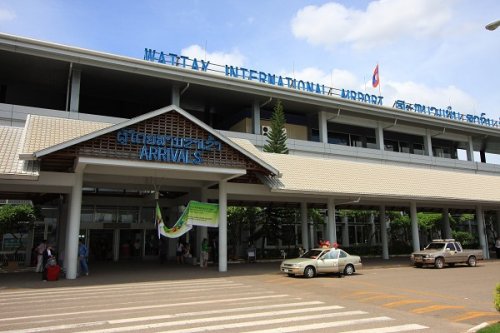