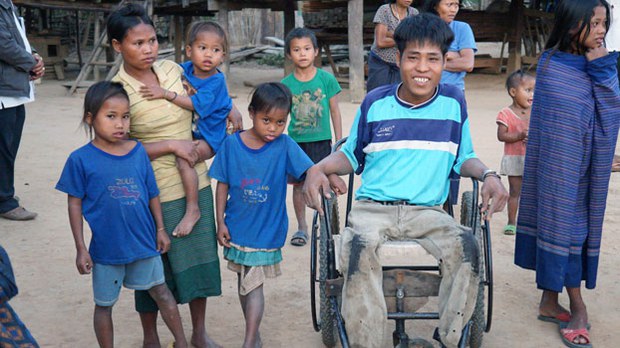 The U.S. wartime use of Agent Orange and other defoliants in Laos more than a half-century ago is still causing dioxin-related congenital disabilities, according to a recent survey by an NGO that is urging Washington to help those who have suffered birth defects.

The War Legacies Project, an NGO which raises awareness of the long-term health and environmental impacts of herbicides sprayed in Indochina, conducted a survey of 126 villages in southern Laos’ Savannakhet and Saravan provinces, bordering Vietnam, between 2015 and 2019. The villages sit within a five-kilometer (three-mile) radius of spray routes.

The survey found that 500 people in Laos under 50 years of age have congenital disabilities that may be associated with their parents’ or grandparents’ exposure to toxic herbicides during the war. It also found that more than 50 percent of those affected were under the age of 20 — “leaving a legacy of debilitating diseases and birth defects in its wake more than two generations later,” the NGO said.

Dioxins — manmade chemical compounds now recognized as known human carcinogens — have been shown to induce birth defects in all species of animals that have been studied.

The U.S. military sprayed 12 million gallons of dioxin-contaminated Agent Orange and eight million gallons of other herbicides on Vietnam and parts of Laos and Cambodia between 1961 and 1971 to kill vast swathes of forest and cropland during the Vietnam War, the report notes.

The herbicides used during the war were up to 50 times more concentrated than what was acceptable to use on U.S. farms at the time, and Agent Orange — the most notorious of the herbicides — had been contaminated by dioxin during the manufacturing process by producing the chemical at too high a temperature, according to the report.

The U.S. military sprayed nearly 400,000 gallons of mostly Agent Orange along the Ho Chi Minh Trial, which ran through Laos’ territory, between December 1965 and March 1966, the report says.

At least 800 villages in five provinces in southern Laos were sprayed with herbicides during wartime, though the NGO was able to survey communities only in Savannakhet and Saravan provinces, said Susan Hammond, founder and executive director of the War Legacies Project. The other three provinces are Khammouane, Sekong, and Attapeu.

“Part of the problem with Laos is also that we don’t know the full extent of the spraying,” she said she said in an interview with RFA.

On average about four or five people per village surveyed has disabilities that were consistent with those caused by exposure to dioxin, Hammond said, adding that altogether about 600,000 gallons of Agent Orange was dropped on Laos during wartime, including the U.S.’s Secret War in Laos (1961-1975). The most common birth defects found were hip dysplasia, paralysis, and cleft-lip or cleft palate.

She estimated that overall thousands of people with disabilities from exposure to the toxic sprays could be found in the area encompassing the five provinces and that birth defects are still being found in people born today.

The 46-page report, titled “2021 Report on the Laos Agent Orange Survey: State of Health and Livelihood,” says that the U.S. government has not appropriated any funds to assist people with disabilities in areas of Laos sprayed with Agent Orange and other herbicides.

The U.S. government has provided financial assistance to Vietnam since 2007, with more than U.S. $390 million going towards dioxin remediation and health and disability programs, and dedicated $14.5 million in fiscal year 2021 to assisting people with “severe upper and lower body mobility impairment or cognitive or developmental disabilities,” the report says.

The areas in Laos that were sprayed with herbicides are remote and poor communities inhabited by ethnic minorities who do not have immediate access to health care.

“The U.S. government hasn’t issued funding to help the people,” Hammond said. “They are helping people in Vietnam who have been exposed, who lived in the areas that were sprayed with herbicides, since 2007,” Hammond said.

“So, we’re hoping that the U.S. government will do the same for Laos in the future, but at the moment they are not providing any funding directly to the people with disabilities who live in the areas that were sprayed,” she said.

The U.S. State Department did not respond to e-mails and phone calls from RFA asking about the report.

Senator Patrick Leahy, who chairs the Senate Appropriations Committee and has pushed for the clearing of landmines in Laos and has led efforts to help address the military damage caused in Vietnam, said the use of Agent Orange in Laos only recently came to light.

“We want to know what, if any, dioxin contamination from Agent Orange exists in Laos, and we want to identify Laotians who are suffering from disabilities that may be the result of exposure to dioxin in areas where Agent Orange was sprayed so we can help them,” he said in e-mailed comments to RFA.

“We have known about the UXO problem in Laos for many years and have been working to clear U.S. cluster munitions, but we only recently learned that Agent Orange was sprayed there,” added Leahy.

“We know the use of Agent Orange in Laos was far less than in Vietnam, but we want to work with the Laotian Government to determine the scale of the problem and what can be done to address it,” said the Senator.

The U.S. government has spent more than U.S. $500 million in Laos, Vietnam and Cambodia to dispose of unexploded ordnance (UXOs), Senator Tammy Baldwin told a panel on Agent Orange and UXOs in Laos at the Stimson Center in the Washington, D.C on May 27.