Motorcycle riding report to Long Cheng, formerly known as “the most secret place on earth”

It’s hard to surprise those of us who regularly ride motorcycles through Laos. We’ve seen the karst rising in the early-morning mist, faced the roughest terrain, and visited many a quiet and practically unknown village. Life off-the-map is a daily routine when you explore this country on two wheels. Every year, Motolao travels enough miles in Laos alone to circle the entire planet. Every year. So if we haven’t seen or tried it yet, we’re probably on the way right now.

Long Cheng is a great example. This site has long been hidden from public view, tucked behind a mountain fortress and guarded by security for the last 50 years. Now that’s changing, and we’ve already been up to take a look around what has been known for decades as The Most Secret Place On Earth.

Once the busiest airport in the world, Long Cheng was the headquarters for a CIA covert operation supporting the Hmong forces of General Vang Pao against the communist forces of North Vietnam. Most of the world knew nothing about this – not even Congress, back the USA – so it has since become known as The Secret War In Laos. This effort comprised a massive network Of “Lima” sites (LS Landing Sites) dotting the mountains of Northern Laos that enabled the delivery of supplies into this rugged terrain. These supplies included both aid for the displaced people of Laos and munitions for the war effort. (Southern Laos also had its share of Lima sites, as the war effort was expanded in an attempt to disrupt the Ho Chi Minh Trail; there, small Aircraft would mark targets on the Trail and call in the bombers. But that’s another story . . .).

We at Motolao have been privileged to visit Long Cheng with people who were stationed there during the war, both pilots and others. It’s an interesting place to encounter with such people, of course, as memories come flooding back, both good and bad. It was a war, after all. And the People of Laos still live with the physical trauma war today; unexploded ordnance is still lying around as deadly as the day it was dropped.

Now, as Laos is opening up to one of the strongest supporting factors of foreign income, tourism, the blank spots on the Lao travel maps are getting smaller and smaller.

With an innovative exploratory team of awesome motorcycle riding friends, we we’re forging an as-yet untraveled journey in Laos. Soon, it’ll be accessible for visitors from all over the world 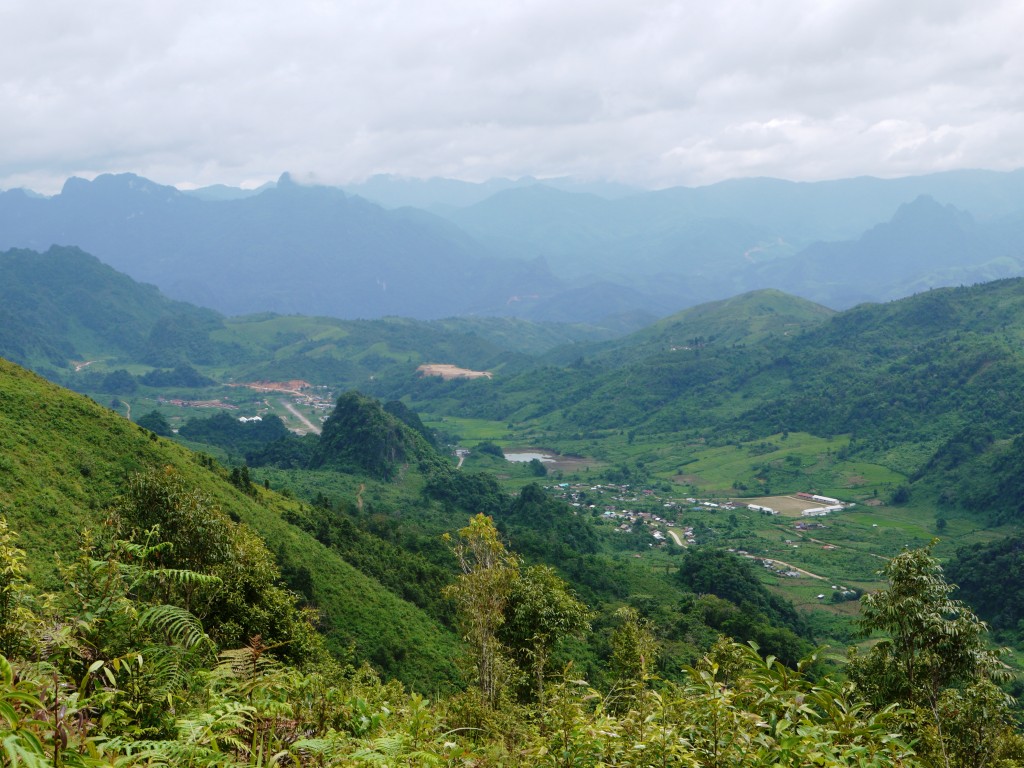 *by Christoph Lancer, CAN

After reading the promotion for this trip, I was intrigued. With some time to explore, I made contact with Motolao, and after a visit to their shop I decided to make the trip. Their guys knew a lot about this place, which put me at ease, as there are some remote sections of trail. They prepped the bikes appropriately and fitted me out with the right equipment – and information – I needed to make the trip a good and safe one.

My staring point would be Luang Prabang, surely the finest city in Laos. I set off full of coffee from the Bolaven Plateau and started my adventure South. I admit I was pretty worried that morning with so many things going through my head. Off-roading was my biggest concern – I had had just a little experience long ago. Paved roads were no problem, though, and I whistled through the Lao countryside enjoying the never-ending bends and the splendor of the views. I had brought along some food and water and planned to stop at the top of the Kasi Pass to have lunch. This was a Motolao recommendation, and I wasn’t disappointed; dining alone on a stunning hillside was like finding peace. Though I didn’t want to leave, more mountains and more bends finally took me into Vang Vieng, where I spend the night. 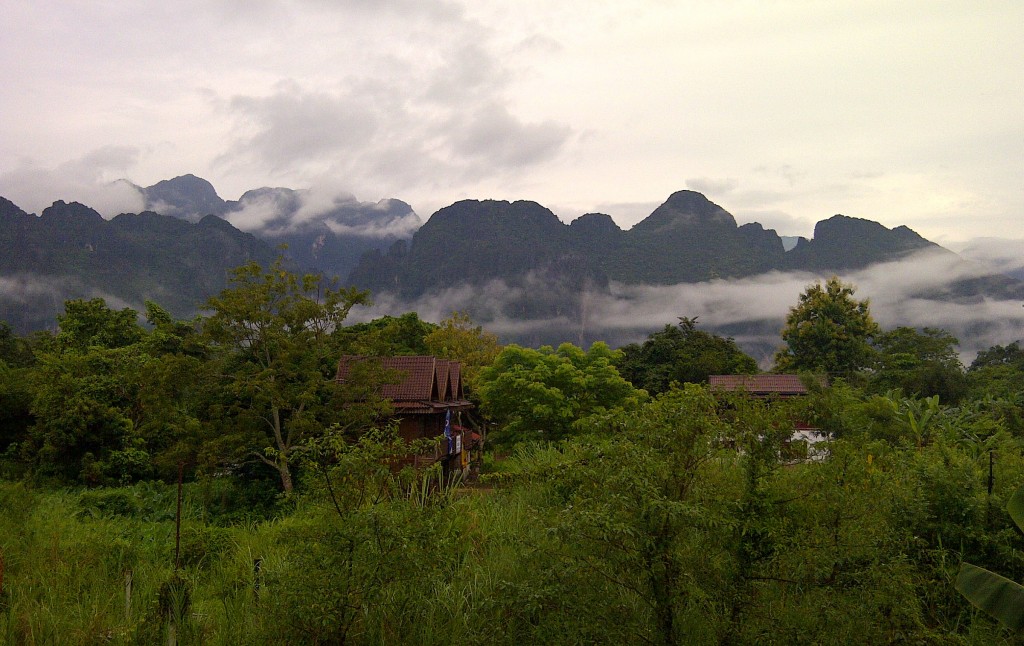 Dinner that evening for me was a quiet affair. I had resumed feeling preoccupied about the remote sections, worrying about breaking down or doing something wrong. Eventually, though, I let go of all this and thought about what I had done that day: with all the positive experiences already under my belt, I would go into tomorrow ready for the challenge.

Ready to leave Vang Vieng, I was awake early the next day and once again organized a picnic lunch alongside breakfast. I wanted as much time in Long Cheng as possible, so I checked the bike checked and topped off the tank and I’m set off through mountains of Vang Viang while they were still covered in mist. Soon enough I turned left off the Highway – this was the moment of truth, as the pavement gave way to a graded dirt road covered in potholes. Small villages became fewer and farther between, and I was soon alone. I think this is what I had been waiting for: to enjoy this ride in solitude. And I did. 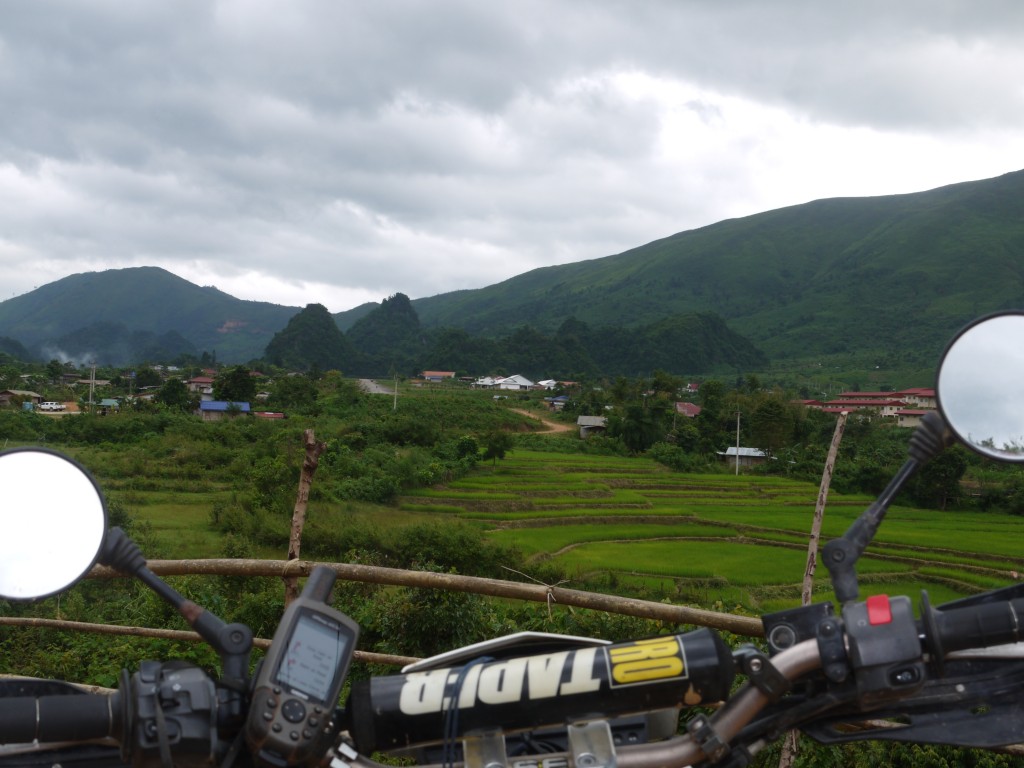 As the trail ascended up into the mountains, gravel, rocks, and mud gave way to some wonderful sections of riding. I was so lost in the moment that when I saw the sign for Long Cheng district, I suddenly remembered where I was going. It couldn’t have been any better. I rolled into Long Cheng and just sat outside the village perimeter and gazed down at the notorious runway, Long Cheng LS-20A. 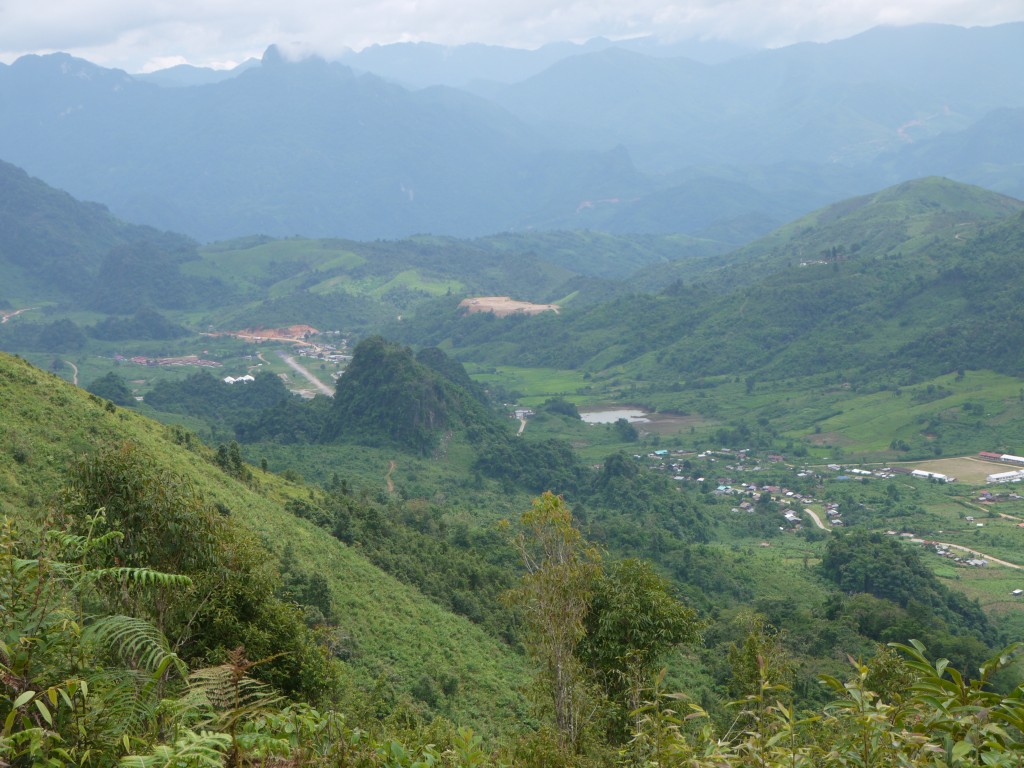 Finally, I went in and booked into the guesthouse, quickly changed and headed back outside to look around. My contact in Long Cheng showed up at the same time and greeted me with a big smile and a “Sabaidee.” For the next day and a half he showed me around the village from the kings place to a skyline ridge to a walk on the runway. I even saw Vang Pao’s house. It was an amazing experience to see all of this firsthand, all of this evidence of what had happened here. Lying in my bed that night, pleasantly exhausted, I reflected on the way the mountains and weather in a place like this could keep the secrets locked in forever. We can only imagine, really, what it was like. Once a bustling secret town of 30,000, now it’s a secret ghost town of 3000.

Tomorrow I would tackle the trail to Phonsavanh. 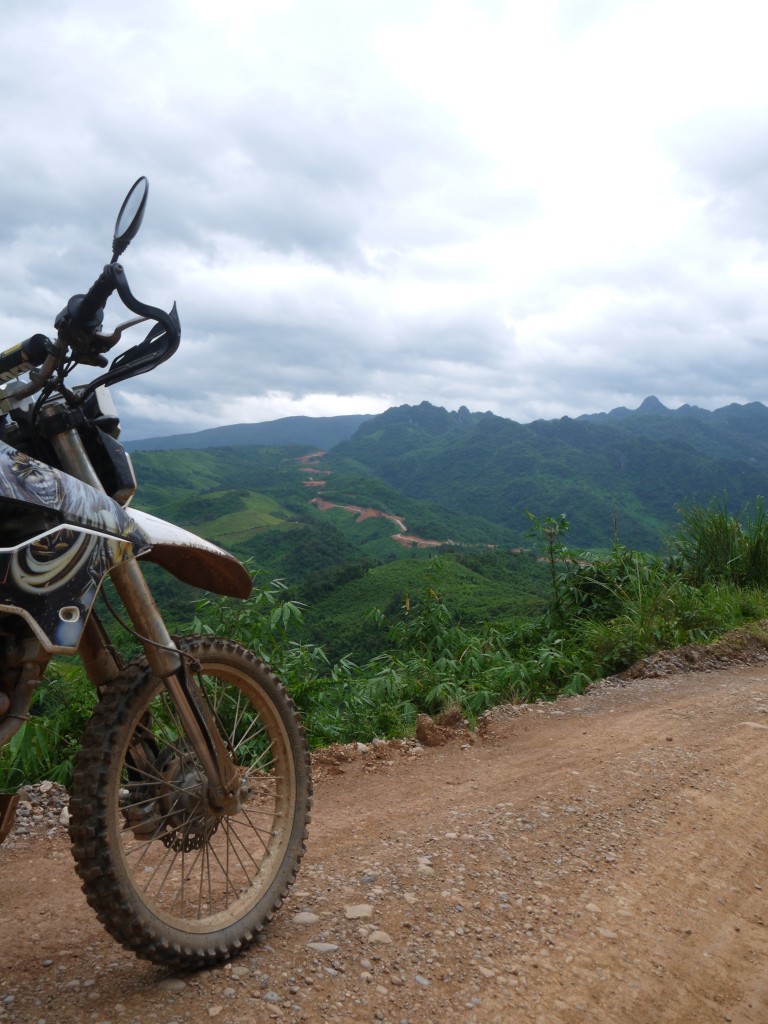 Leaving Long Cheng was easy, but the trail up past Skyline ridge soon had my full focus. It was washed out, rutted, and littered with rocks and stones. It had been raining for 3 days, and it showed. The trail went past another Lima Site, Xam Thong formerly LS20, and I could see lots of war scrap here and there.

Remote and cloaked in mist, this is some serious riding; once I made it through a stretch of cleared landslides, I was able to savor the solitude of the ride again. Just me and the bike that had become my companion. It never complained; it just got the job done. I stopped along the route as I had done many times along the way just to soak it up. This was freedom I was tasting. 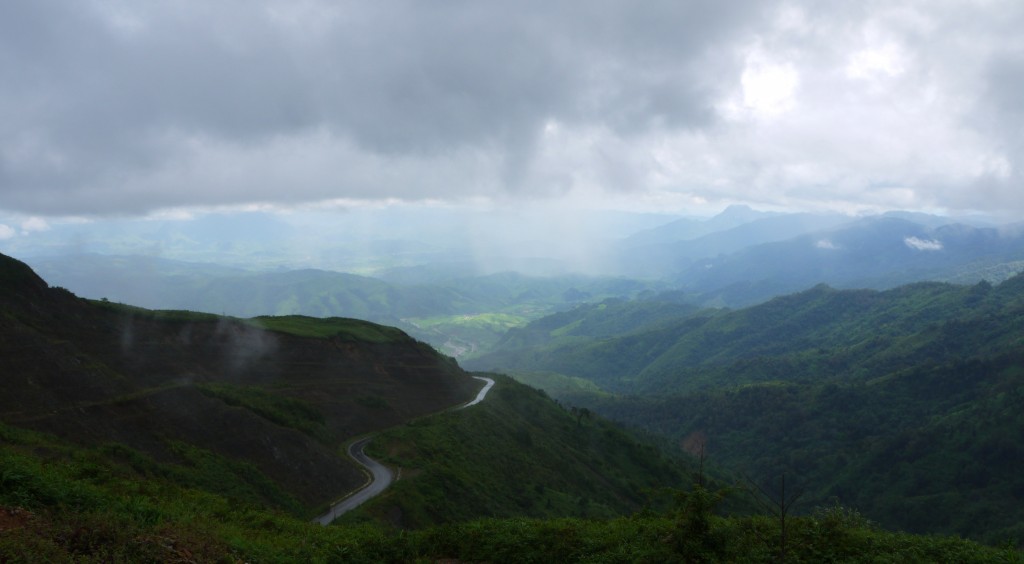 I arrived in Phonsavanh exhausted. The ride had been hard but rewarding, and I decided to have a beer before I did anything else. This was a sort of milestone on my trip, for tomorrow I would be back on the pavement. Riding off-road is very different from riding tarmac, and something I now want to learn more about. Of course, I ended up having a few beers and chatting with some people, something I had done a lot of over the last few days: the locals are friendly and full of smiles and goodwill. I enjoyed talking about what I had done over the last few days. It gave me a chance to re-live the experience. 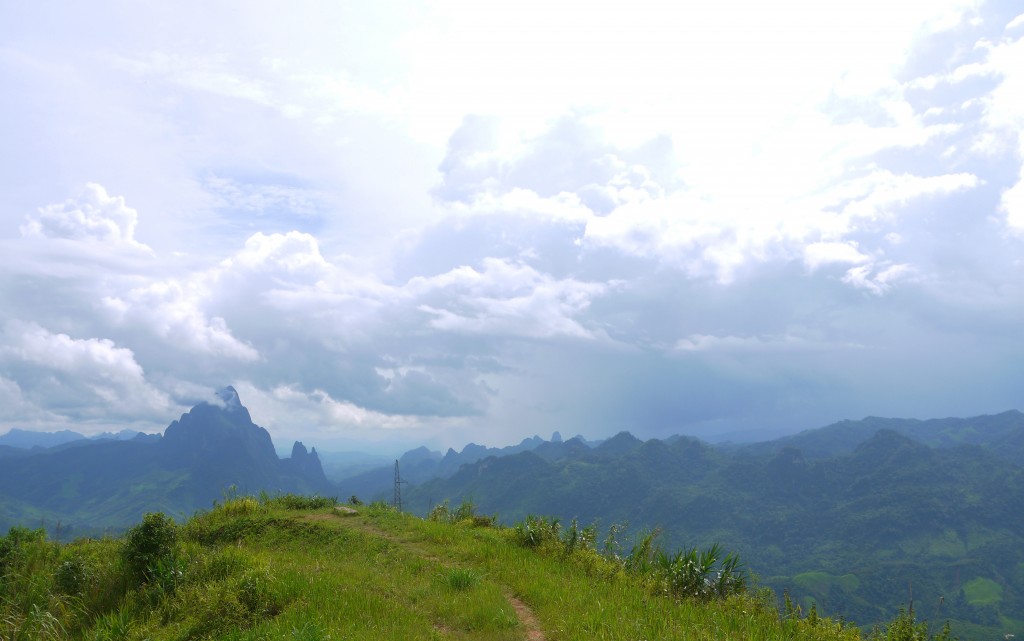 The last day on the road I was a little sad it was coming to end.
With the hardest part behind me, I would on this leg of the journey ride leisurely back to Luang Prabang. Alone with my thoughts on an amazing road full of bends and hills like a a roller-coaster, I reflected on the fact that I had gone to very farthest point you could. I realized how lucky I was to have taken this adventure . . .or do you make your own luck in life?

I rolled into Luang Prabang as if crossing a finish line. I had made it back safe to the Motolao shop, where I received a warm welcome from the boys, who were keen to hear stories of my adventure. And it had been an adventure.

“I didn’t know where to start, so I started with Long Cheng, The Most Secret Place On Earth.” 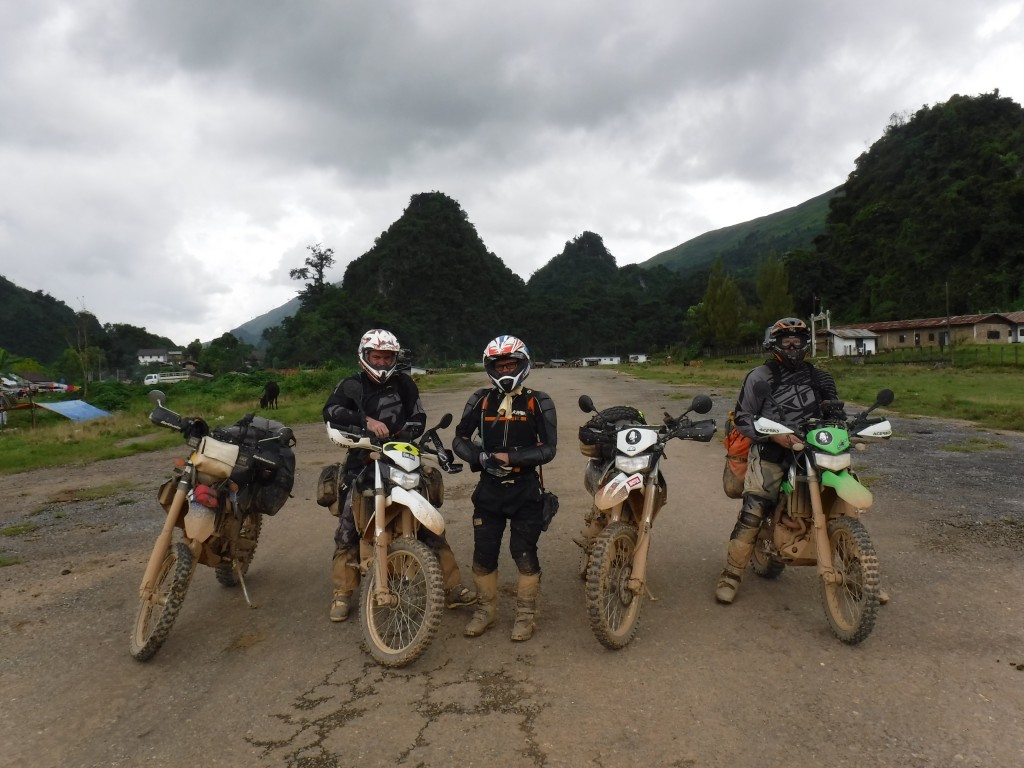 More Mysterious 'Jars of The Dead' Have Been Discovered in Laos
Deep Sky Dreaming Carries Hostess To New Horizons Via Qatar
Share This Post: