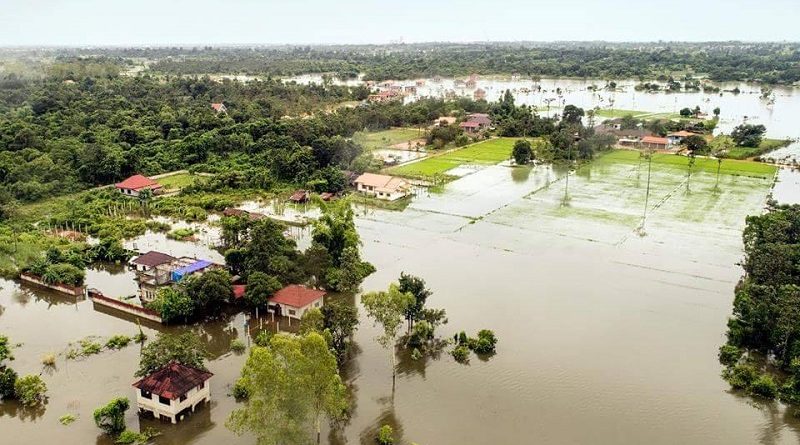 The Ministry of Agriculture and Forestry reported that storms flooded low-lying areas in six northern provinces, three central provinces including Vientiane, and two southern provinces, damaging or destroying more than 1 million hectares of crops and fisheries.

Khammuan province’s farmland was the most badly affected, followed by Savannakhet.
Officials said the extent of the floods would have a long-term impact on food security projects as well as hinder efforts to boost agricultural production.

In particular, the storms will have a bearing on the ministry’s targets for 2016-2020 which were set to ensure food security, greater commercial production, and sustainable forestry management.

Under these targets, the ministry is pursuing annual production of 2.5 million tonnes of paddy rice through government-introduced food security projects. Of this, between 200,000 and 400,000 tonnes was to be stockpiled as a national reserve.

In the wake of the floods, the ministry’s Department of Irrigation is cooperating with provincial authorities to provide financial support in combination with funding to repair damaged irrigation systems.

The ministry will also support farmers with planting vegetables, clean agricultural production, and planting rice in the dry season from November to April.

The ministry had set a target to increase agricultural production in 2018-2019 from 177,000 hectares to 185,000 hectares. The ministry will store 986 tonnes of series 3 rice seeds as well as harvest 500 tonnes of series 1 and series 2 seeds, which are expected to be ready at the end of this year. The rice seeds will be distributed to farmers for planting in the dry season.

Minister of Agriculture and Forestry Dr Lien Thikeo said recently that so far this rainy season farmers had planted crops on 234,000 hectares, equal to 31 percent of the target.

Dr Lien said he was anticipating losses incurred in the rainy season to reach around 527 billion kip. Environmental experts predict that climate change is expected to bring increasingly severe drought and flood conditions to Laos, with crop yields possibly falling 10 percent by 2020 and 30 percent by the year 2050.

This could further affect food security improvement measures which the government is continuing to work on with its agencies and non-governmental organisations.