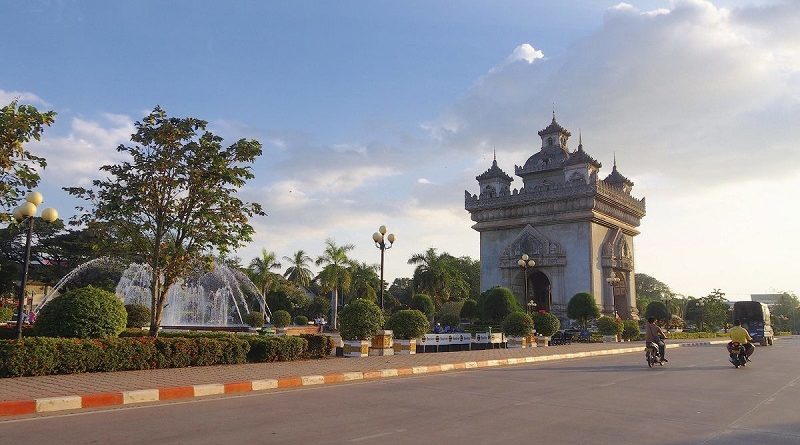 Patuxai is a massive war monument and triumphal arch in the center of Vientiane, Laos. It was completed in 1968, using funds donated by the United States – funds that were meant to be used for the construction of an airport

Patuxai, meaning Victory Gate in English (and variously written as Patuxay, Patousai and Patusai), was built between 1957 and 1968 in memory of the Laotian soldiers who died during World War II and the war of independence from France in 1949.

It’s also known as the Arc de Triomphe of Vientiane due to its resemblance to the Arc de Triomphe in Paris. Patuxai, however, is slightly taller than its Parisian counterpart, has four gates rather than two, and is covered in distinctly Laotian designs.

The exterior of the monument is decorated with traditional Laotian motifs, including Buddhist symbols, Hindu deities and female spirits of the clouds and waters known as apsaras. The ceilings beneath the four arches are decorated with further depictions of Hindu gods, such as Brahma and Vishnu, and mythological creatures like the mythical bird-woman Kinnaree and the three-headed elephant Erawan.

On top of Patuxai, meanwhile, sit five towers, again built in the traditional Laotian style. Four of these are located on each corner of the monument, while a fifth rises up from the center, higher than the rest. These five towers are decorated with flower motifs and each is topped with a golden finial.

Needless to say, the construction of the Patuxai monument was a costly project. The Laotian government, however, managed to fund the bulk of the effort with money donated from the United States – despite that money having been donated for an entirely different project.

In the 1950s, the United States provided Laos with funds and a huge amount of concrete for the expansion of the city’s airport, which could then serve as a base for US fighter jets during the Vietnam War. But the funds and concrete arrived before any contract had been signed, so the Royal Laotian Government decided to build a massive triumphal arch, rather than an airport serving foreign interests. For this reason, locals jokingly refer to Patuxai by another name: the Vertical Runway.

No mention of this is made on the sign attached to Patuxai. But the sign is strangely honest in other ways, stating that the monument was never actually completed due to the country’s turbulent history, and that “From a closer distance, it [Patuxai] appears even less impressive, like a monster of concrete.” Not a glowing appraisal, but refreshingly frank.

Know Before You Go

Patuxai is located along Lane Xang Avenue, within easy walking distance from downtown Vientiane (where most tourists stay). Visitors can climb the stairs that lead up through the seven stories inside the monument, passing through souvenir shops, a small museum and all the way to the top where the main viewing platform is located. Patuxai is open Monday to Friday from 8 a.m. to 4:30 p.m. and from 8 a.m. to 5 p.m. at the weekend. The entrance is 3,000 kips (about $0.35 US).