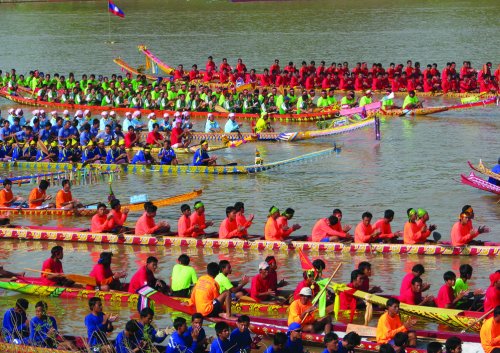 The Vientiane Traffic Police Department will station some 300 police around the capital’s downtown from October 11-17 to ensure public safety during this year’s boat racing festival.

Vientiane Traffic Police Department under the Ministry of Public Security on Friday held a meeting to plan security measures during the boat racing festival.

The police officers will be stationed inside the festival area and in vehicles outside the area and on standby to deal with any road accidents.

Some 13 vehicles will be on patrol in the festival precinct to maintain security in the period leading up to the boat races.

Police will focus their patrols along Luang Prabang, Samsenthai and Setthathilath Roads.

Vehicles travelling from the north to the festival will be allowed to park at areas set up by the festival committee or along Souphanouvong Road.

Vehicles travelling from the south are allowed to park at the Department of Public Works and Transport and Phearvath School.

Motorists wishing to avoid the festival congestion downtown are advised to use the following Roads: Asean, Nongbuek, Dongdok, 450, Khamphengmeuang and Mittaphab. This will allow road users to access the 13 Road North, 13 Road South and Thadeua Road.

Traffic is forbidden from travelling on Chao Fa Ngum Road from the International  Clinic junction to Pakpasak junction during the festival from October 14-17. Vehicles making deliveries for the festival will be allowed from 5-9am.

The police are calling on road users travelling to the festival to pay attention to traffic regulations and obey police officers’ instructions in order to minimise congestion and road accidents.

Police are also warning festival goers to take full precautions regarding their safety and security as well as being on the lookout for pickpockets and bag snatchers.