The bushmeat markets of Lao PDR (Laos) are filled with racks of wild game harvested both legally and illegally from the surrounding landscapes. While these meat markets certainly provide local protein to patrons, for wildlife biologists they offer something more. These bizarre zoological exhibits are a rich source of information about wildlife populations and wildlife consumption in remote areas.

In September 2012, a team from the National University of Laos surveyed markets in central Lao PDR for squirrels. In one of the many small markets, Master’s student Daosavanh Sanamxay found something remarkable, a single specimen of a flying squirrel previously undescribed to science. The researchers described this newly discovered species in a 2013 Zootaxa publication, giving it the English name: the Laotian giant flying squirrel (Biswamoyopterus laoensis). 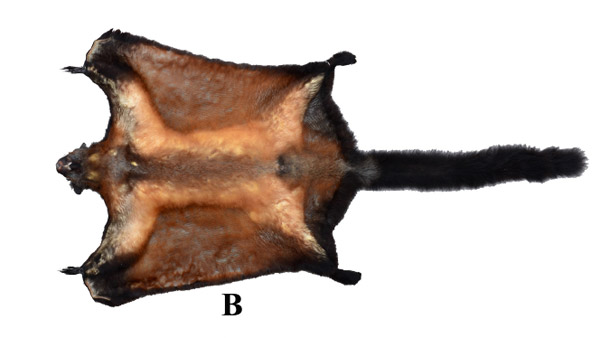 Though the new species does show close affinities to the Namdapha flying squirrel, it is certainly distinct, differing substantially in color of the body, patagia (membrane between limbs of flying mammals), tail membrane, and tail pelage, as well as size.

“We don’t know how endangered this species is… during my second survey in the market, I found approximately 10 dead body of this species in the [freezers] of the sellers,” Daosavanh Sanamxay, lead author and current master’s student at the National University of Laos, told mongabay.com.

The exact habitat of this new mammal is not known, but the researchers speculate that the habitat is not far from the market where the specimen was found, 5 km Southwest of Nam Kading National Biodiversity Conservation Area (NBCA), a heavily hunted area consisting mostly of pristine dry evergreen forest or semi-evergreen forest and limestone karst formations. Central Lao PDR is characterized by these limestone cliffs and rock formations and is home to other rare endemic rodents including the Kha-nyou (Laonastes aenigmamus), the only member of a rodent group thought to have died out 11 million years ago that was incidently also discovered in a bushmeat market, and the Lao limestone rat (Saxatilomys paulinae).

Lao PDR and the Greater Mekong region have experienced unprecedented development over the past decades, driving the construction of major roads and dams and attracting foreign investments in Lao’s oil, natural gas, coal, hydroelectric potential, and mineral deposits. Rural communities in Laos earn nearly half of their income from harvesting and selling non-timber forest products, meaning that expansion into forests and unplanned development poses a considerable threat to rural Laotian communities.

The major threats for the wildlife in Lao PDR are habitat loss and harvesting for food. Squirrels in particular face serious threats. According to the Zootaxa paper “they rank as the most commonly traded mammalian ‘bush-meat’ in local markets.” 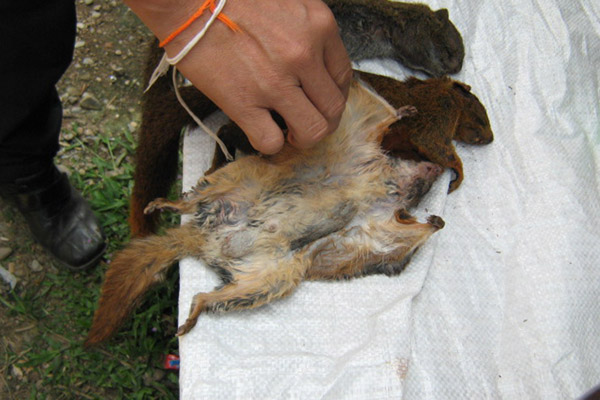 Other squirrel species in the market. Photo by: Daosavanh Sanamxay. 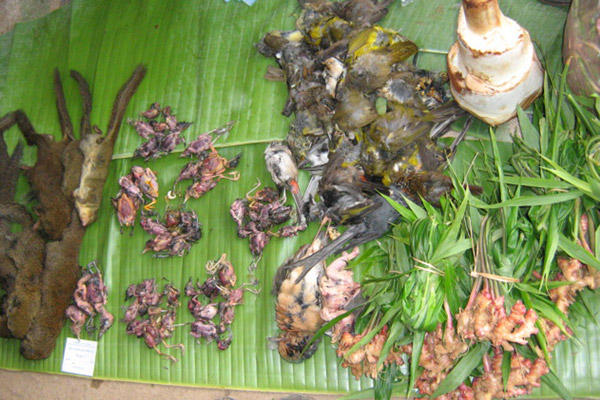 Birds and mammals in Laos PDR market. The bushmeat trade, combined with the traditional medicine trade, has been blamed for creating ’empty forests’ across parts of Asia where, even though forest still stands, most mammals and birds have been wiped out. Photo by: Daosavanh Sanamxay. 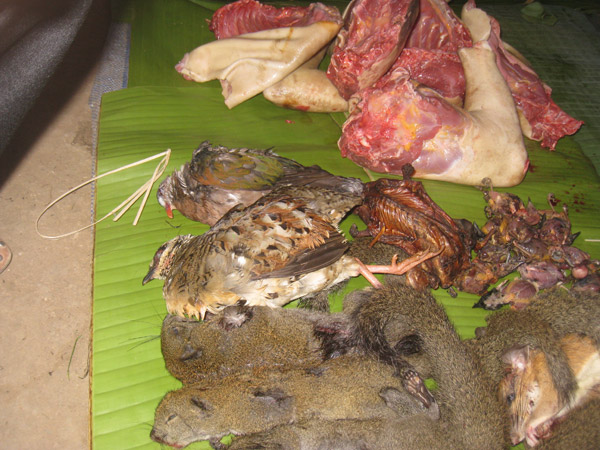