A slowing in China’s economy is having rippling effects on Laos, which has been described by the World Bank as having “once of the fastest growing” economies in the East Asia and Pacific region.

A decade long mining boom, combined with a rapid development of hydropower, has seen Laos’ growth rate reach over 7 percent a year, allowing national output to more than double, generating some half a million jobs.

A key player in the economic progress has been China. A recent World Bank report on the Lao economy noted China’s influence was continuing to grow.

China is the leading investor, with $6.7 billion in 760 projects from mining, to energy, agriculture, banking and trade as well as construction of commercial properties.

In 2015, China accounted for more than 40 percent of Laos’ public external debt, up from 35 percent three years earlier, with the funding focused on infrastructure and power projects.

But signs of a spillover from a slowing in China’s economy has come in a downturn in bilateral trade, according to senior Lao officials. Two-way trade accelerated from just $1.3 billion in 2011 to reach $3.6 billion in 2014. But it slid to $2.78 billion last year.

Laohoua Cheuching, a senior official in the Ministry of Industry and Commerce, recently told Lao media that new initiatives are needed to stem the slowdown.

Laohoua said the downturn was due in part to a slowing global economy. Lao exports to China focus on mining and agriculture, especially rubber, while key imports are machinery and electronic equipment.

“We have to find new products to export to offset the loss. If not the value of our exports to China will decline further,” Laohoua told the Vientiane Times.

The World Bank has also raised concerns over the slowing China economy that “may effect some potential investment on pipeline projects that do not have secured financing.”

China is also a key investor in real estate. In Vientiane, Chinese owned commercial buildings stand developed or under construction. This includes the $1.6 billion That Luang Lake residential and commercial complex covering 365 hectares.

But Vientiane-based analysts told VOA the project’s cost and the departure of Somsavat from the government has created some uncertainties about the project. 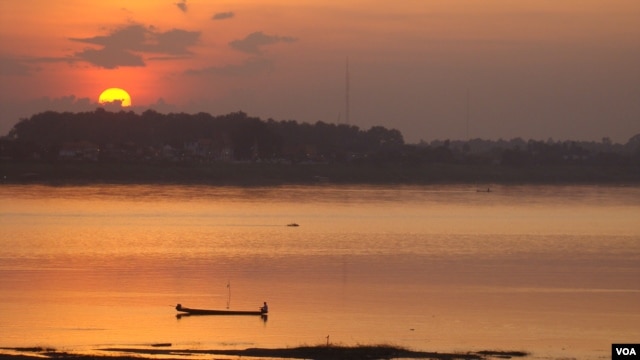 Analysts say Laos’ dependence on China and narrow industrial revenue base of hydropower and mining leaves the Lao economy vulnerable.

“They have to expand their industrial bases, such as textile garments, food processing and so on – is more important for this country’s future,” Bando told VOA.

“They are lacking and running short of skilled workers. Even the low level workers, their skills are very low compared to other countries,” Bando said.

Pavida Pananond, a professor of international business at Thammasat University in Bangkok, said Thongloun’s strategy appears to be directed to building on Laos’ regional connectivity.

“It’s not surprising that the Lao Prime Minister would now be trying to change the perspective that this is a land locked country but a land linked [one] because he wants to make use of regional integration,” Pavida told VOA.

Signs of success in diversification are starting to emerge. Laos has in place more than 10 special economic zones throughout the country, with 200 registered businesses in different stages of development.

The economic zones largely focus on entertainment services, logistics as well as manufacturing and commerce, employing more than 11,000 workers, 60 per cent of whom are foreign.

“Deeper integration could accelerate growth and development and contribute to achieving Lao PDR’s goal of graduating from least-developed status by 2020,” the ADB said.