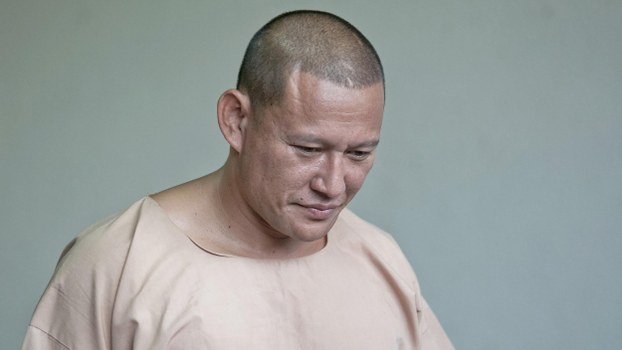 Thailand’s Appeal Court has upheld a life sentence for Lao drug kingpin Xaysana Keophimpha, better known as Mr. X, who was found guilty two years ago of colluding to possess large quantities of methamphetamines in 2015 and 2016, according to his lawyer.

Xaysana, 42, was arrested with accomplices Chumphon Phanompai and Ratchapon Ratsaponpakorn on Jan. 19, 2017 at Suvarnabhumi International Airport in Bangkok in possession of drugs with evidence of intent to distribute.

While Ratchapon was acquitted, Xaysana and Chumphon were sentenced to death by a lower court in Thailand in September 2018, before their punishments were reduced to life in prison because their confessions were deemed useful to an ongoing investigation.

Authorities brought the two men to the Appeal Court to hear Thursday’s ruling on their life sentences from the Central Correctional Institution for Drug Addicts, where they have been serving their terms.

Xaysana’s lawyer, who gave his name as Witoon, told RFA’s Lao Service that the court upheld the sentences of both men.

“The verdict was delivered only by the court to the defendants—no lawyers were involved,” he said.

“The defendants now have 30 days to appeal to a higher court. That is the process of the law.”

Witoon said Xaysana had yet to inform him whether he intends to pursue an appeal.

Xaysana and Chumphon had been found guilty of arranging for 2,381,400 pills of methamphetamine, known locally as “yaba,” to be smuggled from Laos to southern Thailand and Malaysia between July and September 2015.

Their conviction also stemmed from charges of smuggling another 1 million pills into Thailand in August 2016 and delivering them to a distribution ring in the country’s southern provinces through a contact in Malaysia.

On Dec. 19, 2019, the Appeal Court upheld a separate life sentence for Xaysana for smuggling 1.2 million pills into the country in September 2016.

In April, Xaysana denied playing a role in a major Southeast Asian drug ring and backtracked on his confession. His lawyer at the time, Vorakorn Pongthanakul, told a court that Xaysana did not understand Thai law and said officials told him he could change his plea at his trial.

Police have reported that prior to his arrest, Xaysana regularly boasted of his wealth through photos he posted online and often hosted celebrities at lavish parties in both Thailand and Laos.

In January, a court in Laos sentenced eight people to death for their roles in connection with Xaysana’s drug ring and sentenced fourteen others with ties to the organization to prison terms of between two and 20 years.

The eight sentenced to death were convicted on charges of purchasing and selling heroin and methamphetamines, weapons trade, buying and selling stolen property, money laundering, and assault. Under Lao law, possession of more than 500 grams of heroin or meth is punishable by death.

The “steep increase” in seizures of methamphetamines in Southeast Asia points to a growing demand for the drug in the region, where 287 million pills were seized in 2015, according to the 2017 report of the U.N. Office on Drugs and Crime (UNODC).

Most of those seizures took place in Cambodia, China, Laos, Myanmar, Thailand and Vietnam, UNODC said.

Lao Govt Explains Main Reasons For Rising Debt Burden
Are You Being Watched Through Your Webcam?
Share This Post: