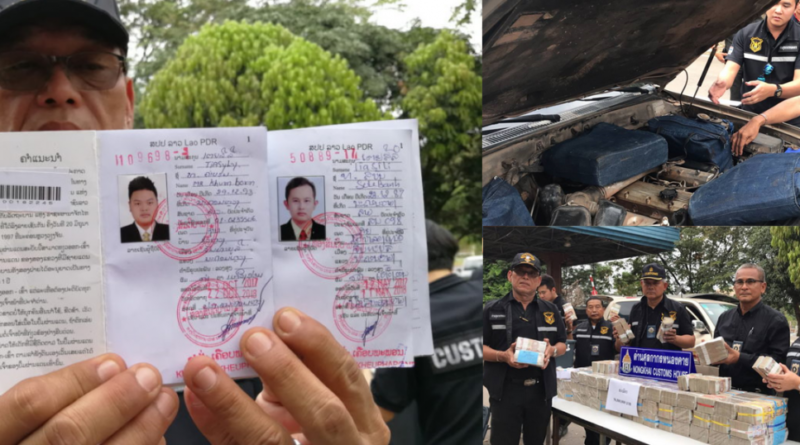 Two Lao nationals were arrested while they allegedly attempted to smuggle nearly 100 million baht in cash into Thailand through a border checkpoint in Muang district yesterday. They were detained while crossing the checkpoint in a Toyota Land Cruiser with a Lao licence plate at the First Thai-Lao Friendship Bridge which connects Nong Khai in Thailand to Vientiane in Laos yesterday afternoon.

Inside the vehicle, authorities found several milk cartons containing stacks of 1,000-baht banknotes which were covered with milk packs.On closer inspection, they found a large amount of money hidden throughout the vehicle’s structure including the car engine.

The vehicle and cash worth 98 million baht in total were impounded.

Nimit Saengamphai, chief of the Nong Khai Customs House, said yesterday the arrest was made after officials received a tip-off that the money would be smuggled in. According to the Finance Ministry, travellers must declare to customs officials if they carry foreign currencies valued at 450,000 baht or higher in or out of Thailand.

The pair are suspected of smuggling the money into the country.

However, officials were not convinced by their accounts and would widen a probe to see whether the brothers were embroiled in other illegal activities.

They have also been blacklisted and banned from entering the country, Mr Nimit said.

It is not clear if other charges will be laid as a result of the alleged cash smuggling venture at the border or what will happen to the cash.