Visitors to the Vat Phou festival from February 18-22 in Champassak province need not worry about accommodation as hotels and guesthouses are not yet fully booked, an official has confirmed.

There will be rooms available in Champassak district where the festival takes place and nearby districts especially Pakxe, President of Champassak Hotel and Restaurant Association Mr Thui Phetsavanh said.

Hotels and guesthouses are not fully booked due to a reduction in the number of foreign tourists visiting Vat Phou at present.

“The number has continued to decline gradually compared to five years ago, he added.

This may have been caused by a lack of promotion from relevant sectors, while some may have been deterred by the high price of Vat Phou entry tickets.

Another reason for accommodation availability was that most of domestic tourists visiting Vat Phou festival preferred to stay with friends or relatives, Mr Thui commented. “This is directly impacting on hotel and guesthouse business operators,” he said. “Nevertheless, we expect there will be more hotel bookings from neighbouring countries, especially Thailand during the festival as they often book hotels for short stays,” Mr Thui said.

He explained that foreign tourists won’t have to worry about food with many restaurants serving western and local food.

This year, Vat Phou festival will take place from February 18-22 and the provincial authorities will also celebrate the 15th anniversary of Vat Phou and its associated ancient settlements within the Champassak cultural landscape being listed as a UNESCO World Heritage Site.

The anniversary occurs during this year’s Makhabouxa, which takes place every year from the 13th waxing moon day to the 15th day (full moon) of the third month of the Lao lunar calendar. This year the days fall on February 20, 21, and 22.

On February 22, there will be offerings to monks in the morning and a candlelight procession in the evening.

The town of Luang Prabang was also inscribed on the list in 1995. 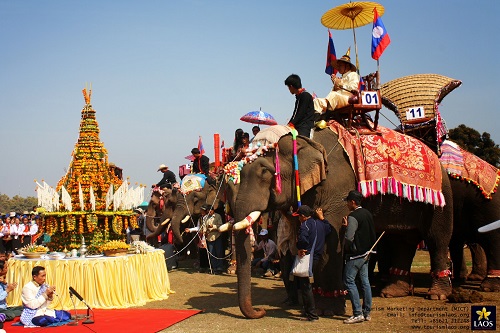