An environmental group has accused two Vietnamese rubber firms of involvement in massive land grabs in Cambodia and Laos.

In its report, Global Witness said HAGL and Vietnam Rubber Group had been allocated over 280,000 hectares for rubber plantations in the countries.

Residents had been evicted and offered inadequate or no compensation, it said. It described the companies’ operations as leaving “a trail of environmental and social devastation”.
Both companies say their operations comply with local laws.

The problem of land grabs has been raised for several years by donors and NGOs in both countries.

Private land ownership was destroyed by the decades of war and revolution during and after the Vietnam War, so most is now considered state-owned. The Cambodian and Lao governments have been encouraging commercial exploitation of land to boost economic growth.

HAGL and the Vietnam Rubber Group have denied any involvement in land-grabbing, illegal logging or corrupt activities. Each said in separate statements to the BBC that they believed their investments in rubber and sugar plantations are fully compliant with local laws.

HAGL is a striking Vietnamese business success story. It began as a small furniture factory in the highland town of Pleiku in 1990, not far from the Cambodian border. It then expanded, first into timber and later into hotels and property, and now rubber and sugar plantations.

Its founder and president, Doan Nguyen Duc, is now one of Vietnam’s wealthiest men.

The Vietnam Rubber Group is an umbrella organisation for 22 state-owned enterprises.

Both have led an aggressive expansion of Vietnam’s rubber production over the past decade, making it the world’s fourth largest exporter after Thailand, Indonesia and Malaysia.

But available land is now hard to find in Vietnam. Cambodia and Laos have some of the last unexploited tracts of suitable land left in South East Asia.

Traditionally, rubber in South East Asia has been cultivated by smallholders, but these two Vietnamese companies mark a shift towards large-scale plantations operated by big corporations.

In its response to the Global Witness report, HAGL said it provided tens of thousands of jobs for local people.

But Global Witness has interviewed Cambodians and Laos who say they were driven off land they were cultivating, and saw their fields bulldozed and then planted with rubber trees for businesses owned or part-owned by the two Vietnamese companies.

It has also accused Deutsche Bank and the IFC, the financial arm of the World Bank, of investing in both companies, and of failing to perform due diligence on their operations in Cambodia and Laos.

Its says five of Cambodia’s richest tycoons are the main beneficiaries of the millions of hectares of government land concessions. 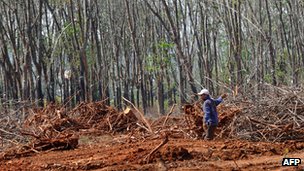 Vietnam is the world’s fourth-largest exporter of rubber, but available land is scarce

Deutsche Bank says it is not directly financing either company. It says it holds shares in HAGL in a fund on behalf of other investors and provides “clerical trustee services to HAGL as it does to thousands of listed companies globally”.

The IFC said in a statement that it holds no stakes in Vietnam Rubber Group. It does have an investment in a fund in Vietnam, which holds a stake in HAGL.

There is now a well-documented pattern of land disputes in both rural and urban Cambodia, where poorer residents are evicted from land they may have lived on for many years to make way for development projects. These projects are usually run by wealthy entrepreneurs connected to the ruling party.

The Cambodian security forces have repeatedly been accused of violently suppressing protests against the evictions, even when the evictions appear to be illegal.

The Cambodian courts have imposed prison sentences on protesters, but there have been no convictions of those accused of seizing land.

Last year, Prime Minister Hun Sen announced a moratorium on land concessions for business, but left a loophole which has allowed hundreds of thousands more hectares to be approved for development.

He also announced a project to process land titles for poorer Cambodians, but this has been widely condemned by local human rights groups as ineffective.

The growing concern over the harmful effects of land concessions for rubber in South East Asia echoes earlier criticism of oil palm plantations, which now cover huge areas of what used to be tropical forest in Malaysia and Indonesia.

Forecaster: Heavy Rainfall, Storms For Next Three Months
Public Concerned Lao Forests Will Be Left With No Big Trees
Share This Post: