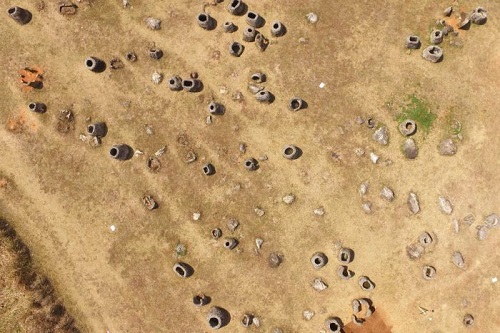 Ancient, monumental sandstone jars up to two-and-a-half metres high dot the landscape in central Laos in seemingly random patterns — what was their purpose? Who built the sites? Where did they live?

These questions have perplexed locals and visitors for centuries but now researchers from Australia’s Monash University and the Australian National University are using drone technology and virtual reality tools to remotely dig for answers, and explore untouched sites of the aptly named Plain of Jars.

For decades, the danger of unexploded bombs has made archaeological exploration there risky.

Over 270 million cluster bombs rained down on Laos from 1964 to 1973 as part of a US campaign to halt the spread of communism through Indo China.

About 30 per cent of the bombs did not explode on impact, leaving about 80 million bombs still on the surface, or just below.

Only a handful of the 80 or so known sites have been cleared of ordnance and archaeologists have had to use well-trodden paths or enlist local people to navigate them through safe pathways to sites of interest such as quarries.

Now drone technology is opening up new possibilities for exploration and discovery.

“The use of drones is critically important for us because we can look at even a cleared site,” Dr Louise Shewan told Catalyst.

“We can survey it with a drone, but often the adjacent quarry site isn’t cleared so we can at least fly the drones over the quarry site and get an understanding of what’s there.”

After the drone has completed its surveillance, the photographs are uploaded into software that generates a very realistic photo 3D model of the site.

Photo: An photo image of an uncovered skeleton compared to the virtual 3D model image collected via drone. (Supplied)

Dr Shewan and her colleague Dr Dougald O’Reilly then use Monash’s CAVE2 — an immersive 3D facility — to explore the site remotely and securely with virtual reality glasses.

“This technology allows us to compare at a macro scale the different types of sites, the distribution of jars, so there’s a lot of different angles that you can use to approach the data,” Dr O’Reilly said.

Currently, helicopters mounted with lidar are used to reveal what lies beneath jungle covered sites but the Monash team are in the process of developing a drone equipped with software that will enable it to fly autonomously over and under tree canopy while analysing the data in real time.

Earlier this year, in a collaborative project with the Laos Government, the ANU/Monash team revealed that the Plain of Jars was used for different types of human burial practice, but there’s still no understanding of how the jars got there, who created them, or evidence of where the people who are buried there might have lived.

The archaeologists hope to use the new drone to look for drag marks where the jars have been brought from the quarry areas, habitation areas and ceramic scatters.

“We can use this technology for mapping and data interpretation, we can look at the transportation of the jars,” Dr O’Reilly said.

“With the use of drones, we could probably access all of the sites.

The team hope that using virtual reality as a digital record and archiving tool will win the Plain of Jars UNESCO World Heritage status.

GIF: A drone surveys one of the Plain of Jars sites.