During the monsoon months (April to September), flooding can make it difficult to explore the countryside outside of Vientiane capital so it is preferable to conduct tours in and around Vientiane. A visit of Wat Si Muang is particularly suitable. 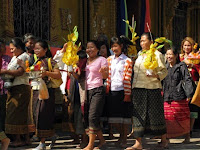 Wat Si Muang is not as well known as Wat Phra Kaew or Wat Sisaket but Wat Si Muang nevertheless has a special attraction.

Founded in 1563 under the reign of King Setthathirat it was destroyed by the Siamese in 1828, like most other temples in Vientiane, rebuilt in 1915 and renovated in 1960. Wat Si Muang is currently in good condition and well maintained. The temple is situated at the junction of Samsenthai and Setthathirath road. A statue of King Sisavangvong is in a nearby park just next to the main entrance. 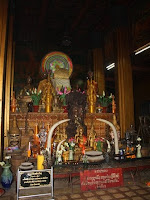 The main attraction of Wat Si Muang, however, is the presence of a square pillar which perhaps was once part of a former Khmer sanctuary. This 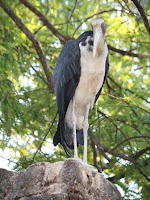 pillar became the lak muang or city pillar of Vientiane in 1560. The pillar is inside the sim.

Behind the main sanctuary, one can see a ruined Khmer twin stupa – inhabited by a large stork-like bird.

Wat Si Muang plays an important role for the yearly That Luang Festival, held during the month of November.