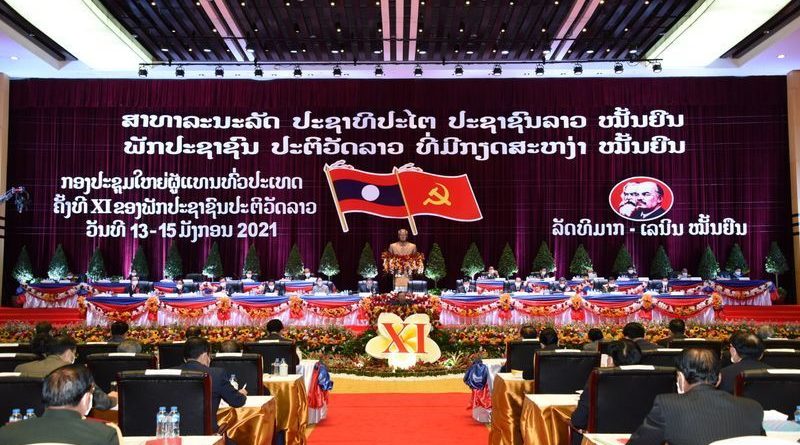 The 11th Congress of the Lao People’s Revolutionary Party opened on Wednesday to track achievements made in implementing the resolution of the 10th Party Congress under the leadership of the Party Central Committee over the past five years (2016-2020).

The three-day National Congress will also outline a development roadmap and elect a new Party leadership to lead the nation’s overall tasks in the next five years (2021-2025).

Delivering his opening remarks, Secretary General of the Party Central Committee, Mr Bounnhang Vorachit, welcomed the 768 delegates and 147 invited guests from state and private sectors attending the congress in Vientiane.

Chairing the congress, Mr Bounnhang said the event is politically important and a historical milestone that reflects the Party’s growth and strength in terms of both quantity and quality.

Over the past five years under the leadership of the Party Central Committee in implementing the resolution of the 10th Party Congress, Laos has seen a number of achievements despite rapid and complex changes in the region and the world, as well as the Covid-19 pandemic, he added.

“The nation has continued to enjoy strong political stability, social security and order,” Mr Bounnhang, who is also state President, told the congress.

“Independence, sovereignty and the fruits of the revolution have been firmly protected.”

The living conditions of the multiethnic Lao people are improving as poverty is alleviated.

These accomplishments have been achieved despite Laos facing financial difficulties and the harsh impacts of the Covid-19 pandemic.

The Wednesday session of congress discussed a draft political report, presented by Mr Bounnhang, which outlined achievements and shortcomings in implementing the resolution of the 10th Party Congress and a development roadmap for the years to come.

Today (Thursday), the congress is scheduled to discuss a draft report of the overall leadership of the 10th Party Central Committee.

An election is also scheduled to choose the new secretary general of the Party Central Committee – the top post in the Party. The Party chief commonly also holds the post of state president. Both positions are currently held by Mr Bounnhang.

Later on Friday, participants are scheduled to approve the resolution of the 11th Party Congress, which outlines the fundamental roadmap for the country’s development.

The election of the new Party leadership comes ahead of the coinciding elections, also held every five years, in the top legislature and administrative bodies, which are expected to take place in the coming months.

Next month, a national election will take place to elect members of the National Assembly. Shortly after they have been elected, members of the parliament’s 9th legislature will hold an inaugural session to elect a new state president and prime minister, and approve new cabinet members.