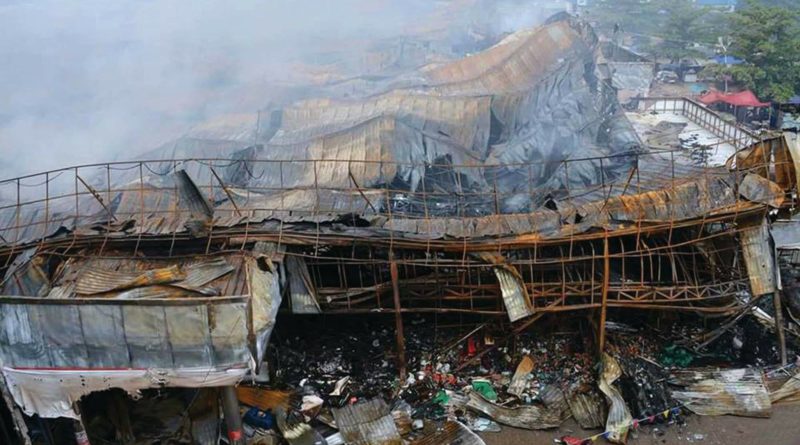 One of the capital’s biggest retail spaces, San Jiang market, has been reduced to ash and rubble after a major fire on Friday evening.

Fortunately, no one was reported injured in the blaze.

A pickup and a sedan were destroyed. According to authorities, over 20 fire engines were deployed with more than 100 firefighters from the department and rescue teams fighting the quickly-spreading blaze that engulfed the structure including outlets primarily stocked with clothing.

Police and authorities are continuing their investigations into the incident and are still assessing the approximate extent of the damages.

Opened since August, 2007, the San Jiang market built on 15,000 square metres in Sikhottabong district is the largest in the capital, attracting customers from the city and further afield to purchase items on offer.

It has long proved popular among local and foreign traders of foreign goods, particularly those from China. The fire at San Jiang is one of several to afflict markets in the capital and country over recent years.

In May, the Dongdok campus market at the National University of Laos (NUoL) was gutted by fire, wiping out 158 shops and 15 stalls with damage estimated at almost 4 billion kip.

In 2014, Thongkhankham market in central Vientiane burned down, with 400 shops affected and 110 billion kip of damage inflicted.

Thongkhamkham market site is located near the heart of Vientiane, a well-known and primarily fresh food market boasting a variety of products including fruit and vegetables and items for religious ceremonies.

During the ongoing rainy season, Major Sisouvang advised members of the public to check that electrical devices were turned off before leaving home. He called on people to take extra care when incinerating garden waste and not to let children play with fire.

He also repeated warnings for people to be on their guard against accidental fires and not to take any risks with electrical wiring or appliances or leave burning candles unattended.

According to the Fire Prevention and Protection Police Department under the Ministry of Public Security, 104 fires were reported around the country in the four months from January to April this year in which four people were killed and seven injured.

The estimated cost of the damage from these fires was more than 33 billion kip. The department reported that 104 detached houses burned down and 16 others were damaged.

In other incidents, two fuel tankers, a truck and two motorbikes caught fire and burned.

Twenty-three fires reported were caused by electrical short circuits, another 11 by arson, 17 through carelessness or forgetfulness, 14 resulted from cooking fires, and 20 more remain under investigation.