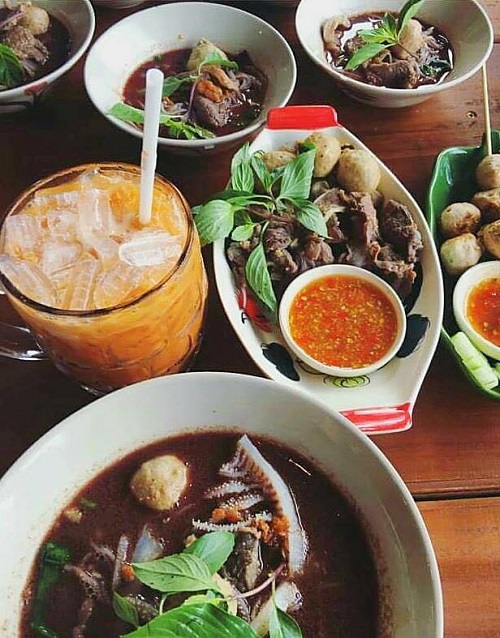 Nowadays the most popular food for diners looking for a quick and satisfying meal is always a dish of noodles, especially at lunch time, and Vientiane is full of big and small restaurants serving up this traditional dish.

This is the food of choice for people who don’t want to cook, and somehow their thoughts always turn to a bowl of noodles.

Today, our newspaper is proud to tell diners about boat noodles – one of many delicious noodle dishes being served up daily by the Mader Boat Noodle Shop in Phonthan village, Xaysettha district, Vientiane.

Boat noodles, or fer heua , is a Thai style dish that has a distinctive flavour. It contains pork and beef, as well as dark soy sauce, pickled bean curd and spices, and is normally served with meatballs and pig’s liver.

The soup also has the original flavour which is beef or pig’s blood mixed with salt to season the broth. The colour is similar to beef noodle soup and it is commonly served in small to large bowls.

The other ingredients of boat noodles are garlic, fried garlic, radish, cinnamon, bean sprouts, parsley, morning glory and some paprika. Thin rice noodles, egg noodles or other kinds of noodle may be used for the dish.

The restaurant’s manager, Ms Bounkhoun Singhalath, says she serves boat noodles with pork or beef with prices ranging from 15,000-20,000 kip per bowl.

The restaurant just opened in December and is open every day from Monday to Sunday from 9am to 6pm.

Customers can also have other types of food, as well as drinks of c ourse. They are sure to have an enjoyable time with their families, friends or that special someone in a nicel y decorated alfresco dining area with music playing in the background. The restaurant also has a separate dining room that gives a bit more privacy.

The restaurant is easy to find and is near the Phonthan water tower. When you get to Phonthan village, you will see the restaurant near the Pingkai Napong shop. The shop’s sign, a large photo of a bowl of boat noodles, indicates you have arrived.

Ms Bounkhoun says the restaurant has received a good response from customers, who have been lining up to be seated on special occasions and festivals since the eatery opened just a few months ago.

Most of the lunchtime clientele are nearby office workers, while in the afternoon families, groups of friends and couples fill the tables.

Citing the trend of boat noodles, Ms Bounkhoun says this style of eating is growing in popularity in Vientiane, offering both convenience and a reasonable price.

She says her chefs are experienced in both cooking and preparing food to customers’ satisfaction. The friendly waiters and waitresses add to the pleasant ambience and she guarantees customers won’t be disappointed.

“We have plans to open other branches in the near future based on the positive customer feedback we’ve received,” Ms Bounkhoun says.

Boat noodles are commonly served with pork crackling and basil or sweet basil. They were originally served from boats that traversed Bangkok’s canals.

In the past, a merchant who sold boat noodles would have been the only person working on a small boat, and would have had to do everything by himself from paddle the boat, scald the noodles, season the soup, serve the dish, check the bill, and wash the dishes.

If the bowl was too big, it would be difficult to hand over to the customer on land and might be easily spilled. This is the reason why the boat noodle bowl is small, for the convenience and safety of the merchant.

Nowadays the dish is also served in riverside restaurants, but the dish’s historical identity is maintained by it still being served in a small bowl, and often with a boat moored in front of the canteen.