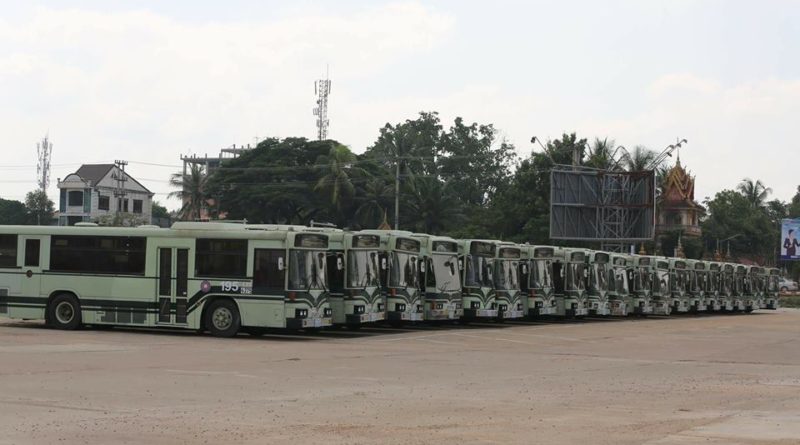 The Commuter Line and Airport Line under the Vientiane State Bus Enterprise (VSBE), forming a new division called City 2, are expected to open for public use within this year, while the Community Line is expected to start operation in early 2018.

The plans were discussed yesterday at a meeting of the 3rd Coordination Committee, attended by the Acting Director General of the Transportation Department, Ministry of Public Works and Transport, Mr Bouaphet Xayasane, and officials from line ministries.

The aim of the meeting was to assess the current situation on the ground and to come up with sound planning and implementation to improve matters.

Speaking at the meeting, Mr Bouaphet said cooperation was needed between line ministries and their development partners to ensure the bus company’s efforts to improve the existing system in Vientiane were rewarded. An improved bus system would benefit everyone and assist the growth of the city.

JICA Chief Representative to Laos Mr Yoshiharu Yoneyama said the City 2 scheme was part of the Project to Enhance the Capacity of VSBE Phase II supported by JICA. This is an important scheme to help improve transport in Vientiane, especially in addressing traffic congestion.

Traffic jams are increasing in Vientiane as the size of the city and its population increases. But the number of people using public transport remains low.

“We hope to put City 2 buses into operation this year as part of the project under the National Strategy on Sustainable Transport. This project is seen as greatly helping socio-economic development,” VSBE Director Mr Khamphoune Temerath said.

“When we get these buses into service on all the routes I’m sure they will help not only to ease traffic congestion but will also reduce carbon emissions by lowering the number of privately owned vehicles on the roads. If more people use public transport it might also lead to a reduction in road accidents,” he added.

“We believe that having more new buses in service in Vientiane will encourage more people to use public transport instead of motorbikes and cars, which are creating traffic jams.”