If you’re looking for an interesting and educational experience not far from Vientiane, the little known Nong Khai Aquarium might be right up your alley. Just over the border on the road leading to Udon Thani is the biggest aquarium in Northeastearn Thailand at Khon Kaen University’s Campus in Nong Khai. 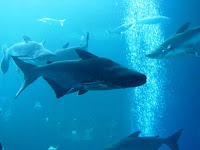 The University campus is a satellite campus of Khon Kaen University, located on the bypass road to Vientiane. If you come from Udon Thani take a left turn just before you enter Nong Khai and follow the signs “Vientiane”. After a few kilometers another sign will direct you to the campus and the aquarium. To get there from Vientiane just follow those directions in reverse; the aquarium turnoff will be on your right. 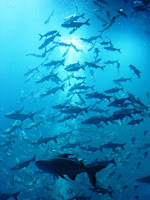 The construction of the aquarium began in 2004 as a collaborative effort of both Nong Khai Province and the University. The idea is to conserve freshwater fish in the Mekong River as well as to stimulate tourism in the province. Conserving the Mekong’s freshwater fish has become 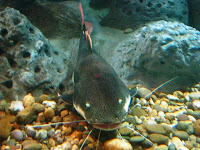 more urgent as Laos proceeds with the construction of its Xayabouri dam project.

There is a small saltwater fish selection on display, which in my opinion is not that special. However, considering the remote location from any Ocean, it is ok. 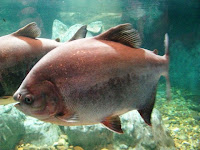 The many freshwater fish species are indeed spectacular. The displayed tanks vary in sizes and shapes and one highlight is the 25 meter tunnel tank featuring all kinds of large Mekong River fish.

As a diver, I fell in love with the atmosphere and the amazing blue world. A great day out just a few kilometers out of downtown Nong Khai…

Plain Of Jars On Track For UNESCO Listing Next Year
PC Air Set For Laos Flights
Share This Post: